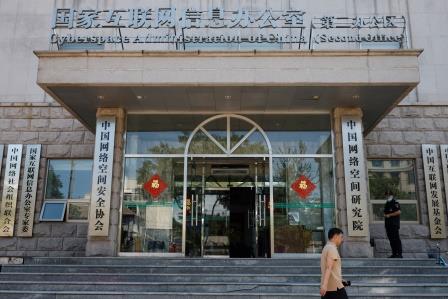 A man walks past an office of the Cyberspace Administration of China (CAC) in Beijing, China July 8, 2021. REUTERS/Thomas Peter/Files

SHANGHAI (CHINA) – After China ordered Didi app removed from mobile app stores as part of a broader crackdown on China-based companies with overseas listings, The company fell for the third consecutive session.

The Cyberspace Administration of China (CAC) has launched security reviews on Didi and three other internet companies, triggering a broader sell-off in overseas-listed Chinese tech firms.

Below are some comments from investors and analysts on the outlook for China’s tech sector:

“The market needs to revalue relevant sectors. Under previous years’ of barbarian growth, some companies could grow 50% a year. Now, growth rate could come down to 30% under tighter regulations.

“Every (tech) company needs to be compliant on data security, whether you’re an internet company, or a new energy vehicle company, because you collect data.

“If a company is not under probe now, that doesn’t mean it will not be investigated later. People are waiting for a precedent. You need to make investment to become compliant, and that will impact growth.”

“I do think it is a legitimate issue and I don’t think it would be unreasonable to expect that Didi will need to make increased investments to assure data security. I also believe that it is likely Didi will face a meaningful fine.

“There has undoubtedly been excesses and limited investment in satisfying regulatory requirements in the past. As investors have limited visibility on whether companies are fully compliant, it is difficult to say where the next potential issue may arise.

“Overall, this should lead prudent company managements to increase internal assessment of businesses practices and reduce a willingness to take risks. It also may have the potential to reduce margins and growth potential.”

“It’s a complete sentiment knock to broad China TMT, no matter where it’s listed and trading.

“Because it is data protection, there is an element of national security linkages to it … It’s going to be potentially far-reaching and much more widespread than the anti-monopoly campaign, which seemed to be just really hitting China e-commerce.

“It’s an unknown. How long does this last? You’ve got to think at least a couple of months before people really absorb the regulatory side of the environment.

“But I do feel that the market is starting to realise that this is a short-lived thing. There is no rationale to try to kill these companies off because they’re so embedded into the fabric of the Chinese new economy.”

“This is just the beginning of these security concerns. We will likely see more crackdowns on companies that rely on storing large data on Chinese users, which may take up to three years before investors begin to regain confidence in these businesses.

“In the meantime, these companies will have to adapt to tougher government regulations imposed on them.

“Depending on how strict the new CAC regulations are, the new rules could potentially lead large tech companies such as Alibaba and Tencent to fall prey to security concerns, which can affect sentiment on U.S.-listed Chinese equities over the short term.”

“CAC seems to prioritise online transportation platforms in the review, likely because they contain sensitive geographical, personal and route data.

“Reviews may extend to newly listed and to-be listed companies, especially on US exchanges which may provide foreign governments access to sensitive information and data.

“Online platforms with social network and transaction information could also be under security reviews.

“Internet giants with strong technology advantage, such as Alibaba, Tencent, and Baidu would likely face limited impacts, as they already adopt higher security standards and have already participated in multiple government projects.

“A sector-wide review is possible but will prioritise those with higher sensitive information.”

“The Didi probe is an epoch-making incident that marks the end of barbarian growth of China’s Internet sector.

“Over the past 20 years, the Chinese government leaned toward efficiency and growth over fairness, taking a relatively laissez-faire attitude toward tech companies’ legal compliance issues.

“Companies like Didi are too big to be fixed. No one knows what happens next. It’s not time for bargain hunting for wise investors.

“Now, for investors in Chinese tech firms, both in the primary and secondary market, the No. 1 question is: ‘is your business legally compliant?’ If you have compliance issues, other questions, whether it’s about business model or financial performance, become meaningless.”

“For Internet companies like Didi, they face not just issues about data security. There are also issues around monopolistic behaviours and labour protection. Risk is only partly priced in.”