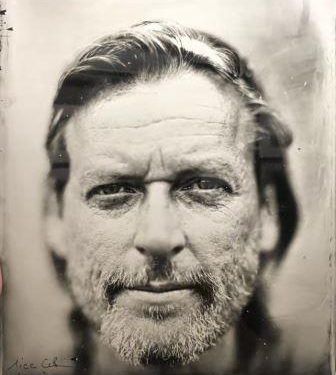 Mica who was born in Thuringia in the year 1972, founded one of Eastern Germanys first design agencies at the age of 19. At 26, he already exhibited his personal artworks in his hometown and then moved to Berlin, where he created and curated ‘Sin-Berlin’ – an exhibition that featured more than 50 artists including his own work. Mica then moved to New York to work as a creative retoucher for well-known photo artists such as Phil Toledano and Stephen Wilkes.

Back in Germany, he started to shoot images himself, exclusively with large format cameras and further pursued image retouching as a profession. For over 6 years he worked exclusively for Mercedes Benz at one of the most creative agencies in Germany, the Jung von Matt.

Since 2016, Mica has been residing in Beijing, China, where he captures everyday life, culture and the landscapes in and around the country.
In 2020 Mica was the first foreigner to win the “Big Artist Award” for abstract art in China.

Speaking about his latest exhibition ‘Elements’, Mica says ” The earth from which I emerged and to which I will return, which leaves me with both feet on reality- whatever it may be, ie. metal, which flow in me as small particles and when they meet, create the spark that unleashes a fire in me. The fire of enthusiasm, creativity, to take me and others with you, to burn for a cause. The water cools me down so I don’t get burned. The eternal flow in me, what carries you away and is constantly in motion and keeps me in motion. And Wood? We in Germany call wooden heads, stubborn, and that’s me, can proudly be a wooden head. But there is another element, the air that keeps my machine running, which leaves the earth, air, what makes water alive can destroy metal, with which no tree can bring its seeds into the world, without which there would be no fire. Air accompanies me from the first breath to the point where I burn to ashes.”

‘Elements’ features works such as ‘The attraction of opposites’, ‘ Interwoven in spirit’, ‘Phoenix’, ‘Phoenix two’, and, ‘Mother’.

‘Elements’ will be on display from June 26 to September 29 at Chaoyang District in Beijing, China.