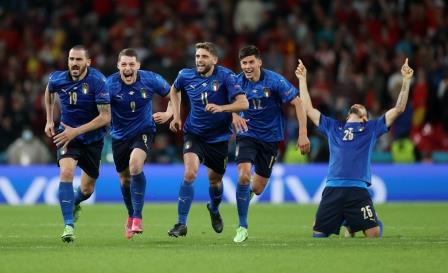 LONDON (UK) – For all the differences in style and approach, there is a remarkable symmetry to the journeys taken by England and Italy towards Sunday’s Euro 2020 final.

Both nations found themselves at historic low points with fans despairing at their decline and then discovered men who could bring change and quickly lead them on a path to success.

For England, that nadir was elimination from Euro 2016 in the last 16 at the hands of Iceland while Italy’s despair came two years later when the four-times world champions failed to even qualify for the World Cup in Russia.

Gareth Southgate was not the man chosen to lead England’s revival. The FA had selected Sam Allardyce for that role but when his reign was cut short by ill-judged comments to a hidden camera, the Under-21 coach was given the job.

Southgate was able to draw on an exciting young generation of talent emerging from the Under-21 team and from the academies of Premier League clubs but his most significant decision was to change the culture around the England team.

He was able to make an England call-up something players looked forward to rather than, as was too often the case in the past, a chore to be feared or avoided.

Southgate reset the often adversarial relationship with the media and also found a tone in his own communications which found the perfect sweet spot between positivity and realism.

With the pressure off, England reached the last four at the 2018 World Cup and then, with more talent integrated into the squad, they methodically progressed through Euro 2020, paying little attention to the constant reminders of failures past.

Still, players in the squad who experienced the bitterness of failure and its fall-out know where they have come from.

“If I think about the last Euros, when we got knocked out by Iceland, that still haunts me and I’d say that’s the lowest moment of my career by far,” said right back Kyle Walker.

“But we’re a lot more mature now. A lot of us have played in more big games, we’ve won more and we can manage games better,” he added.

Roberto Mancini had a different history to confront after Italy’s dismal qualifying campaign for Russia under Gian Piero Ventura ended with the humiliation of a playoff loss to Sweden.

Like Southgate, Mancini turned to youth, but his biggest impact has been on the style of football produced by the Azzurri.

Italy use a 4-3-3 formation, with two playmakers in midfield, usually Jorginho and Marco Verratti, supporting two wingers who like to cut inside and full backs pushing forward to offer width.

There has been a greater emphasis on aggressive pressing and the result has been one of the most enjoyable Italian teams to watch in years.

But Mancini’s revolution did not undermine the fundamentals and he was wise to keep the experience of Giorgio Chiellini and Leonardo Bonucci at the back, who maintain Italy’s traditional defensive strength.

While England have only once previously reached the final of a major tournament, also on home soil back in 1966, this will be Italy’s 10th major final and Mancini instilled in his team a belief that they could quickly rise back to the top.

“At the beginning, when he told us to have in our minds the idea of winning the Euro, we thought he was crazy,” says Chiellini

“Instead, during these years he has created a team which is now on the brink of doing that. And as he has repeated to us after every match, ‘one centimetre at a time’, and now there is only the last centimetre left”.

The past record certainly favours Italy, who have never lost against England in four meetings at a major tournament and have been defeated once in eight competitive games with England.

But, set against that, a 60,000 overwhelmingly pro-England crowd awaits at Wembley, which in this tournament has become a hostile venue for visiting teams and is an environment Southgate’s team relish playing in.

There may be little to choose between the two starting lineups but England have stronger options from the bench as Chiellini noted.

“Their substitutes could all be in the starting eleven of a team that wins this competition. Players like (Jack) Grealish, (Jadon) Sancho, (Marcus) Rashford, (Dominic) Calvert-Lewin, (Phil) Foden were all on the bench but they’re top players, including (Jordan) Henderson – Liverpool’s captain.

“It will be a great match. Neither team will be afraid but both will have a lot of respect for each other.”