The Tomorrow War Movie Review: An action-packed thriller with a narrative from the past 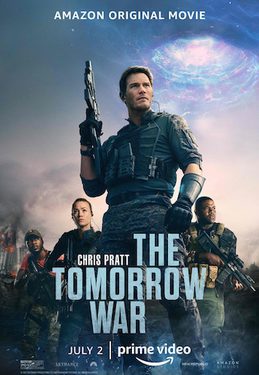 The Tomorrow War starring Chris Pratt is an American military sci-fi movie directed by Chris McKay. Chris McKay who started out as an animator for Robot Chicken and then later went on to direct various episodes of it is also known for working with the Lego Movie team. Tomorrow War is written by Zach Dean.

This is one of those movies that only Hollywood can pull off. It wouldn’t be too far-fetched to say the emotion while watching this movie would remind one of 90’s hit ‘The Independence Day’ and ‘Edge of Tomorrow’, starring Tom Cruise.

James Daniel “Dan” Forester Jr played by Chris Pratt is an ex-military turned biology teacher in a high school, who is visibly upset with not getting ahead in his career. Things take a different turn when soldiers from the future arrive in the present and ask for help fighting an alien invasion in the future. Dan, like other citizens across the world, is sent to the future.

What happens next forms the crux of the movie.

This is one of those typical sci-fi/time travel/military/action thrillers starring humans and aliens. Every once in a while a movie such as this comes out and viewers as usual are invested in it, for all the mind-numbing action. This time the emotion was a tad different, you really want the human race to win. It’s just a ‘pandemic thing’. When the real, tangible world around you is constantly up against an invisible enemy, a movie such as this was relatable in ways we would not have felt before. You want the bad guys gone for good. The movie successfully packs in emotion and family drama too. There are times when one would feel that you have seen this before. In reality, there is nothing that keeps this movie apart from any other alien sci-fi movies of the past. The ‘edge of the seat’ kind of thrill is all that keeps it moving forward. If you are tired of pandemic related restriction and serious cinema, this action-packed distraction would only do you good. The discussion for a sequel is already on. The movie is currently available on Amazon Prime.