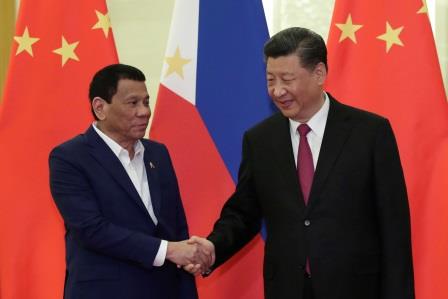 MANILA (Philippines) – A suggestion by a former foreign minister that Beijing may have helped to determine the outcome of a 2016 election that swept the mercurial leader to power has been described as ‘Nonsense’ by Philippine President Rodrigo Duterte’s office on Monday.

Speaking at a forum on Monday, former foreign secretary Albert del Rosario said a “most reliable international entity” had informed him that senior Chinese officials were “bragging that they had been able to influence the 2016 Philippine elections so that Duterte would be president.”

Del Rosario, a key player in the Philippines’ landmark arbitration victory against Beijing’s sweeping South China Sea claims, did not elaborate on the source of the information he said he received in early 2019, how it was obtained, or how China might have influenced the election outcome.

Duterte’s spokesperson Harry Roque, in his regular briefing, described Del Rosario’s remarks as “nonsense” and called him a “proven traitor” before telling him to “shut up”.

Roque has accused Del Rosario, during his time as foreign secretary, of ceding control of the Scarborough Shoal to China.

The Philippine and Chinese foreign ministries, China’s embassy in Manila and the Philippine election commission did not immediately respond to requests for comment.

Though Duterte is highly popular in the Philippines, his embrace of China and reluctance to criticise its foreign policy or maritime conduct has been controversial.

He has long maintained it was pointless and dangerous to challenge China.

Del Rosario referred also to Duterte mentioning during a May 2018 speech that his Chinese counterpart had assured him Beijing would not allow him to be removed from office. Del Rosario said that remark was “disturbing”.

The Philippines will hold presidential elections again in 2022. Duterte is not eligible to seek a second term but has indicated he may run for vice president, which critics see as a potential backdoor to the top job.