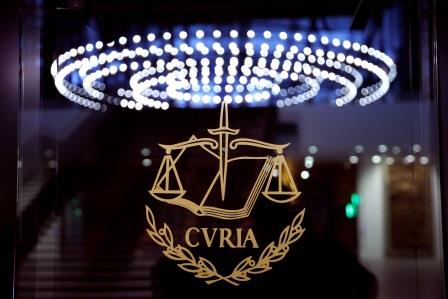 FILE PHOTO: The logo of the European Court of Justice is pictured outside the main courtroom in Luxembourg January 26, 2017. REUTERS/Francois Lenoir/File Photo

WARSAW (Poland): The European Union’s top court ruled on Thursday that Poland’s system for disciplining judges undercuts the bloc’s laws, part of an escalating battle over democratic rules that risks Warsaw losing some of its key development funding.

Poland’s ruling nationalists set up a disciplinary chamber at the Supreme Court in a sweeping overhaul of the judiciary already condemned by the Court of Justice of the EU (ECJ) in Luxembourg and the bloc’s Brussels-based executive, which acts as the guardian of laws across the 27 member states.

Reinforcing that, the ECJ ruled that the chamber “does not provide all the guarantees of impartiality and independence, and, in particular, is not protected from the direct or indirect influence of the Polish legislature and executive”.

The ECJ had already told Warsaw to immediately stop all proceedings at the disciplinary chamber but Poland’s top court said on Wednesday the demand ran counter to its constitution and the country should not comply.

“It is an obvious conclusion for any Polish citizen that the constitution is the highest legal act,” Polish Prime Minister Mateusz Morawiecki told reporters on Thursday. Both he and Justice Minister Zbigniew Ziobro said they considered the EU stance to be politically motivated.

The Polish ruling challenged the primacy of European laws over national ones, a key tenet of European integration. That drew warnings that the ruling Law and Justice (PiS) party is edging away from the EU, which has driven the ex-communist country’s social and economic development.

“It’s not Poland but Kaczynski and his party that are leaving the EU,” Donald Tusk – the head of Poland’s main opposition party, a former chairman of EU leaders and the arch-foe of PiS head Jaroslaw Kaczynski – said.

Warsaw’s refusal to comply with the ECJ does not mean it must now follow in Britain’s footsteps and trigger the formal EU divorce procedure. But it is undergoing a de-facto “legal Polexit of the judiciary”, an EU official said, moving itself further away from the bloc.

The European Commission on Thursday declined comment on the spectre of “Polexit”. It said it was “deeply concerned” with the Polish Constitutional Tribunal ruling and that Warsaw had to “fully and correctly” implement all ECJ decisions.

Steve Peers, law professor at Britain’s University of Essex, said talk of Poland leaving the EU was an exaggeration, as legally it could not be thrown out and there was no sign of a Polish government trying to leave.

Warsaw still has time and scope to negotiate as more procedural steps would be needed before the ECJ could impose any fines.

The EU’s new mechanism to protect the rule of law by cutting financing for violators has not yet been tested and is highly politically sensitive.

Poland has been a top beneficiary of EU development aid since first joining in 2004. While not even the eurosceptic government may want to risk that, Poland’s rights ombudsman – a vocal PiS critic – said no one could be sure where such a crawling “legal Polexit” leads.

Once a posterchild of post-communist transition, Poland has become an enfant terrible of the EU under the PiS, which has also clashed with the bloc over independence of media and curbing the rights of migrants, women and gays.

The Commission began new legal cases on Thursday against Warsaw and Budapest for violating LGBT rights, taking Poland to task over parts of the country declaring themselves “LGBT-free zones”.

Hungary touched a raw nerve in the bloc with a new law that bans from schools materials deemed as promoting homosexuality.

“Equality and the respect for dignity and human rights are core values of the EU,” the Commission said.

Warsaw and Budapest say they are protecting their traditional societies from Western liberalism.