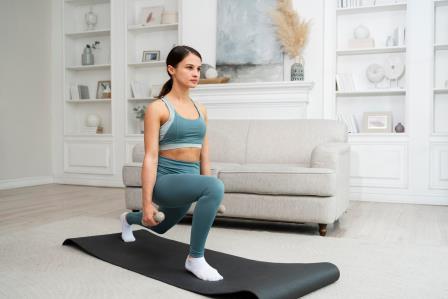 Not enough progress has been made to address physical inactivity worldwide, with adolescents and people living with disabilities (PLWD) among the least likely populations to have the support needed to meet the World Health Organization (WHO)’s physical activity guidelines. Global efforts to improve physical activity have stalled, with overall deaths caused by physical activity remaining at more than 5 million people per year.

Physical inactivity is linked to an increased risk of non-communicable diseases (NCDs) such as heart disease, diabetes, and some cancers and costs at least $54 billion per year in direct health care costs, of which $31 billion is paid by the public sector. The slow progress to improve physical activity worldwide has been exacerbated by the COVID-19 pandemic, with lockdowns likely associated with overall less physical activity worldwide. In addition, inactive people and those with NCDs are far more likely to be hospitalized or die if they develop COVID-19.

These findings come from a new three-paper Series published in The Lancet and launched ahead of the postponed 2020 Olympics in Tokyo, Japan. The authors call for immediate and urgent action to prioritize research and public health measures to improve physical activity worldwide, and ensure physical activity is built into everyday lives.

Despite the growing number of young people diagnosed with non-communicable diseases (NCDs), including cardio-metabolic and mental health disorders, the authors note that research on adolescent physical activity is limited.

Global analysis shows that 80% of school-going adolescents are failing to meet the WHO recommended guidelines of 60 minutes of physical activity per day, with little progress made since 2012. In addition, 40% of adolescents never walk to school and 25% sit for more than 3 hours per day in addition to sitting at school and for homework.

Lead author of the paper, Dr Esther van Sluijs of the University of Cambridge, UK says, “We desperately need to explore both the short- and long-term consequences physical inactivity has on adolescents, and identify effective ways of promoting increases in physical activity, especially in light of the COVID-19 pandemic. Virtual schooling and social distancing have drastically reduced physical activity and increased use of screens, and the consequences of these changes could last a lifetime.”

She adds, “Adolescents make up nearly one quarter of the world’s population, and by ensuring that they grow up in social and physical environments that are supportive of physical activity, we are helping to change their health right now, improve their future health, and positively influence the health of the next generation.”

Physical activity can provide a range of physical and mental health benefits for the 1.5 billion people worldwide living with a physical, mental, sensory, or intellectual disability. However, researchers found that PLWD are 16–62% less likely to meet physical activity guidelines and are at higher risk of serious health problems related to inactivity, such as cardiovascular disease, diabetes, and obesity.

The proportion of adults with disabilities living in high-income countries who meet physical activity guidelines range from 21% to 60%, in contrast to estimates ranging from 54% to 91% for adults without disabilities. The magnitude of disparities in physical activity for PLWD varies across disability types and is greatest for those with multiple impairments.

In addition, researchers found that any amount of physical activity, even if less than the WHO-recommended 150 minutes per week is beneficial to PLWD. Benefits included improving cardiovascular health, muscular strength, function skills, and mental health.

The study authors call for physical activity action plans worldwide to be adequately resourced, monitored, and implemented to truly advance the fundamental rights of PLWD to fully participate in physical activity.

“Interest in disability sport continues to grow and could be a key driver in promoting more empowerment, participation, and inclusion for PLWD. But we also need more research focused on PLWD as well as cohesive, targeted policies and guidelines to ensure the rights of PLWD are upheld and allow for full and effective participation in physical activity,” says Dr Kathleen Martin Ginis of the University of British Columbia, Canada, and lead author of the paper.

The authors highlight that 80% of people with disabilities live in low-income and middle-income countries. However, in this review, virtually all available population data on physical activity in people living with a disability (PLWD) comes from high-income countries in North America and northwest Europe, indicating an urgent need for more research into physical activity for PLWD on a global scale.

Olympics must provide a legacy for health that lasts

“The Olympics and other mass sporting events are a missed opportunity to change health and physical activity at the population level not only in the host city or country but around the world. The Olympics provide a global stage to get people interested in and excited about physical activity. The challenge is how to translate that enthusiasm into sustained public health programs that are achievable and enjoyable for the general public,” says lead author of the paper, Prof Adrian Bauman of the University of Sydney, Australia.

The authors call for pre-and post-event planning and partnerships between local and national governments and the International Olympic Committee and a thorough evaluation framework of physical activity host cities and countries to build a legacy that will lead to more physical activity and improve public health.

Physical activity: an essential human need beyond and independent of COVID-19

“The much heightened public awareness about health presents an opportunity to focus on the benefits of being healthy rather than managing disease. One goal should be to integrate physical activity into the way people lead their lives every day such that the physically active choices, which are often the healthier and more environmentally friendly ones, become the default. Using public transport, active travel, mandatory physical education in schools, and after-school activities are a few possibilities. The pandemic showed how easy it is to go for a 30 min daily walk. By advocating levels of physical activity that people can reasonably integrate into their lives, such as walking, expectations can be managed. Set the bar too high, and people will do nothing. But with reasonable targets, they might just get moving.”