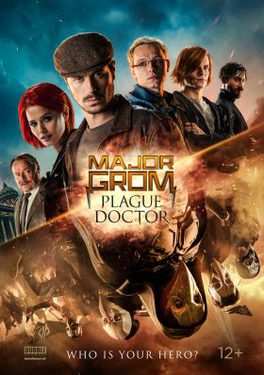 Major Grom: Plague Doctor, is a 2021 Russian action film. The movie is based on the comic book of the same name and is the second film based on the comic. The first time around the studio released a short film, which came out in 2017. This feature-length version stars Tikhon Zhiznevsky in the lead role.

Set in Saint Petersburg, the movie revolves around the young police major Igor Grom who with his quick thoughts and actions tries to fight the bad guys in the smartest ways possible. Unfortunately for Igor, he is a misfit, his outlandish methods keep landing him in trouble. Things take a turn for the worse when the city suddenly has a dangerous vigilante on the prowl. Igor is out to catch the vigilante, who quickly seems to have amassed a fan following and is terrorising the city.

This is a typical superhero movie, without the super powers. It has a city-centric, honest, loner good-guy cop and a city-bred, lunatic, loner, bad guy. The city is ‘plagued’ by even more bad guys! Yes, this does ring multiple bells. This time however, it’s not from Hollywood, it’s all the way from Russia.
The movie has all the regular tropes of a superhero movie. Dim lit alleys with death lurking in it’s corners, bad guys living in towering mansions, the good guy excels in his day job but is a complete failure in his personal life. The character even comes with a hole-in-the wall kind of home, without any friends. You know the drill,  we have seen it all before. In fact, those of you who have watched enough superhero movies, can easily guess where the movie is headed. Despite all the predictable factors, this movie is a fun watch. Grab a bag of chips or order in a pizza. Pop open the soda, sit back and enjoy an out and out action movie.
The movie is currently streaming on Netflix.

Games on: Tokyo 2020’s road to recovery begins from Fukushima with Japan hosting Australia in softball

Games on: Tokyo 2020's road to recovery begins from Fukushima with Japan hosting Australia in softball