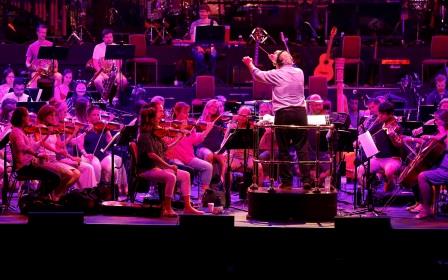 Nicholas Dodd conducts the Albert's Orchestra during a dress rehearsal of the 150th Anniversary Concert: David Arnold's 'A circle of sound', at the Royal Albert Hall in London, Britain, July 19, 2021. REUTERS/Peter Nicholls

LONDON (UK): Prestigious London performance and events venue the Royal Albert Hall opened at full capacity on Monday for the first time since March 2020. The concert hall, however, says the pandemic has been financially devastating.

The Royal Albert Hall is an independent charity, making the majority of its money from ticket sales and donors. During the pandemic, Hassall says they lost 60 million pounds ($82 million) in income and took a 20 million pound loan from the British government’s Culture Recovery Fund.

“This is the worst situation we’ve been in for an awful long time. But I’m confident now that we’re back on our feet and performing again, we can trade our way out of our deficits,” he said.

Like many venues across the capital, they have made changes to keep audiences safe, including a £900,000 ventilation project, and asking for masks to be worn in public places.

“There’s an awful lot being done beyond what the government says we should do to make sure the hall’s a really safe place.”

“I’ve locked myself away for two weeks because there is no way that I would ever miss this,” the show’s composer David Arnold told media.

Saying he and the cast have been extra cautious as they wanted to avoid having to isolate, as has happened to other shows.

The production, which also features star guests including actor Michael Sheen, musician Melanie C and sports star Nicola Adams sold about 80% to 85% of their tickets.

The Royal Albert Hall was opened in March 1871 by Queen Victoria and named in memory of her husband. It was forced to close its doors for the first time since World War Two due to the coronavirus pandemic.