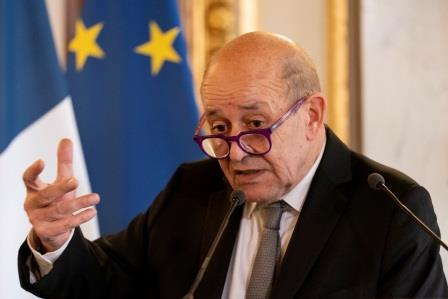 PARIS (France): France on Wednesday criticised a move by Turkish Cypriot authorities to partially reopen an abandoned town in Cyprus for potential resettlement, calling it a “provocation”.

Turkish Cypriots said on Tuesday that part of Varosha would come under civilian control and people would be able to reclaim properties – angering Greek Cypriots who accused their Turkish rivals of orchestrating a land-grab by stealth.

Varosha, an eerie collection of derelict high-rise hotels and residences in a military zone nobody has been allowed to enter, has been deserted since a 1974 war split the island.

French Foreign Minister Jean-Yves Le Drian discussed the matter with his Cypriot counterpart on Tuesday and will raise the topic at the United Nations, a spokesperson for Le Drian’s ministry said.

Cyprus is represented in the EU by an internationally recognised Greek Cypriot government. France presides over the U.N. Security Council this month.

“France strongly regrets this unilateral move, upon which there had been no consultations, which constitutes a provocation and harms re-establishing the confidence needed to get back to urgent talks over reaching a fair and long-lasting solution to the Cypriot question,” Le Drian’s spokesperson said.

Peace efforts have repeatedly floundered on the ethnically split island. A new Turkish Cypriot leadership, backed by Turkey, says a peace accord between two sovereign states is the only viable option.

Greek Cypriots reject a two-state deal for the island that would accord sovereign status to the breakaway Turkish Cypriot state that only Ankara recognises.