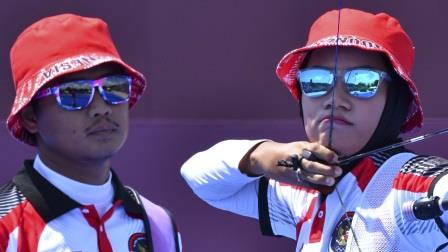 TOKYO (Japan): South Korea won its first Tokyo 2020 gold with a record-breaking run. US archer Mackenzie Brown bemoaned the lack of fans on Saturday after she and Brady Ellison, number two seeds in mixed archery, crashed out.

“It’s supposed to be big and give you goosebumps every time you walk out into a venue,” said Brown, after she and world No.1 Ellison lost in the first round of an event making its Olympic debut to Indonesian 15th seeds Diananda Choirunisa and Riau Salsabilla.

“And we’re out here by ourselves. You know, we’ve got our team mates, but there’s nobody out here,” Brown added.

“To work for five years for an Olympic Games and then not to have any spectators at all is a little bit frustrating.”

In common with all other Games venues in the host city, no fans are being allowed into the Yumenoshima Park Archery Field due to coronavirus protocols, so competitors had only team mates to cheer them on.

“Make some noise for Team USA,” a games announcer said at one point through a loudspeaker, to a muted response.

The gold went to number one seeds An San and Kim Je Deok, who extended South Korea’s long winning run at Olympic archery.

An, 20, said the lack of an audience had not fazed her.

“We had the audience (of team mates) that is just as big as domestic games, so I was nervous at the right amount,” she said, a day after breaking the women’s Olympic scoring record, which had stood for 25 years, with 680 points out of 720.

“I told An San, Let’s shoot confident, and stick to what we have been doing,” added Kim, 17, after they beat Dutch pair 5-3 Gabriela Schloesser and Steve Wijlerin in the final.

When their gold medals were presented on a tray, in accordance with COVID-19 protocols, the pair each hung them round the other’s neck.

Although not a popular sport in South Korea, the country’s Olympic record in archery is unmatched. It has won gold medals at archery in every Games since 1984, and the women’s team is aiming for its ninth straight gold, which would be the longest streak in Olympic history.

Mexico claimed bronze, the country’s first medal at Olympic archery, while a rueful Ellison was left to reflect on what might have been.

“Honestly, I’m so shocked …I completely expected us to win a medal today,” he said.