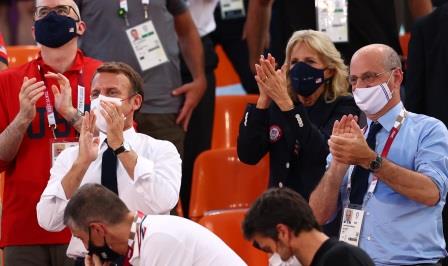 TOKYO (Japan) – French President Emmanuel Macron and U.S. first lady Jill Biden watched their countrywomen tangle on the 3×3 basketball court at the sport’s Olympic debut in Tokyo on Saturday, with the Americans pulling out an upset victory.

Macron and Biden are among the few dignitaries attending the delayed Games, with Japan and much of the world still reeling from the COVID-19 pandemic.

The French president sat in the third row courtside, wearing a tie but no jacket on a steamy evening. Both Macron and Biden wore face masks and, after a brief greeting, the first lady sat one row behind him in accordance with social distancing norms.

Biden jumped to her feet and clapped when the clock ran out with the U.S. team winning 17-10 against No. 1 ranked France, marking the first upset in the sport’s Olympic debut.

Stefanie Dolson, who played for the Chicago Sky in the 2021 season, led her team with seven points.

In 3×3 basketball, played on a half court with three players on each side, a team wins by reaching 21 points or having the most baskets by the end of the 10-minute game clock.

The medal matches will take place on Wednesday after a round-robin tournament of eight teams each for men and women.