Olympics- Football: US rebound with 6-1 win over NZ, Britain and Sweden enter quarters 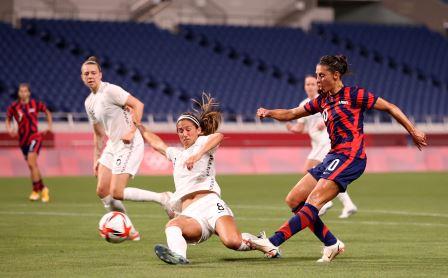 TOKYO (Japan): The United States women’s football team returned to winning ways with a clinical 6-1 victory over New Zealand at Saitama Stadium on Saturday, while Britain and Sweden maintained perfect starts to book their places in the Olympic tournament’s knockout stage.

After suffering a first defeat in 30 months to Sweden in their Group G opener, the Americans, who are world champions, made a much-improved start against New Zealand, breaking the deadlock inside 10 minutes with a Rose Lavelle strike.

With U.S. first lady Jill Biden watching from the stands, the four-times Olympic gold medallists turned on the style with waves of attacks and went on to double their lead just before halftime through a Lindsey Horan header.

Two second-half own goals compounded New Zealand’s problems and U.S. substitutes Alex Morgan and Christen Press also got on the scoresheet as the pre-tournament favourites moved back into contention for a final-eight spot.

Sweden continued their dominant run with a 4-2 comeback win over Australia.

Captain Sam Kerr scored a double to hand the Matildas a 2-1 lead, only for Sweden to score three quickfire goals courtesy of Lina Hurtig, Stina Blackstenius and Fridolina Rolfo’s second.

In Group E, Manchester City forward Ellen White nodded in her third goal of the tournament as Britain guaranteed their progress to the knockout stages with a 1-0 victory over hosts Japan, who stay winless after two games.

“We’re very happy with two wins and that puts us in the position to rest players and recover for the knockout stages,” Britain coach Hege Riise said.

“We were a different team in the second half, we had the togetherness I want to see and we were totally committed.”

A Dominique Janssen free kick in the 79th minute rescued a point for the Netherlands in a 3-3 draw with Brazil, with the Oranje retaining the top spot in Group F on goal difference.

After scoring a treble for Zambia in their 10-3 drubbing by the Netherlands on Wednesday, striker Babra Banda enhanced her status as the competition’s breakout player with another hat-trick in a 4-4 draw with China in Group F.

China had a goal machine of their own in Wang Shuang, who scored four times including a late penalty to earn her side a deserved point at Rifu’s Miyagi Stadium.

Wang became only the third player to score four goals in a match at the Games and the second in the tournament after Dutchwoman Vivianne Miedema.

Earlier, forward Janine Beckie scored in each half as Canada beat Chile 2-1 at the Sapporo Dome.

Olympics-Football: US rebound with 6-1 win over NZ, Britain and Sweden enter quarters

Olympics-Football: US rebound with 6-1 win over NZ, Britain and Sweden enter quarters