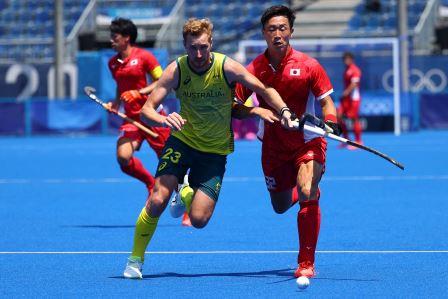 TOKYO (Japan): World champions Belgium defeated the Netherlands 3-1 in the men’s hockey tournament at the Tokyo Olympics on Saturday thanks to a stunning hat-trick from Alexander Hendrickx, while Australia beat hosts Japan in a thrilling opening game.

Hendrickx scored three goals in five minutes as the Belgians came back from a goal down to take revenge on the side that beat them in the semi-finals of the Euro Championship last month.

“There, our product was not finished yet. Now, we’re already one step closer to that finished product,” said Hendrickx, who scored a penalty stroke and from two penalty corners.

“We played calm and kept the ball in the team. We killed the game.”

Earlier on Saturday, Australia beat hosts Japan 5-3 while India fought back from a goal down to beat New Zealand.

Australia’s ‘Kookaburras’ trailed 3-2 at halftime after conceding three goals in quick succession but kept fighting to turn the tables in the final two quarters.

“Japan are a tough opponent. We wanted to get the result today,” said midfielder Daniel Beale, who scored the final goal.

“Luckily, we got the three points and we’re just looking to build each and every game. This is definitely a good place to start with a win.”

The Australians pulled level in the 34th minute after Blake Govers scored a penalty corner and went ahead on the sun-drenched pitch of the main stadium with a backhand shot from captain Aran Zalewski that flew high in the net.

Beale took an assist from forward Tim Brand to put the game away.

Australia’s players were taking on plenty of ice water and using fans and cold towels to cool themselves during breaks but Beale said they would adapt to the humid conditions.

“It’s hot, but we’re just going to deal with it and get on with it,” he said.

“Luckily coming from Australia we’re used to a high heat so I think everyone has to deal with it. The team that copes the best is going to go the furthest in this tournament.”

Rio gold medallists Argentina drew 1-1 with Spain after conceding in the 52th minute while playing with a man down following a yellow card minutes earlier.

India, who have won gold medals at eight Olympics, conceded early against New Zealand but equalised quickly through a penalty stroke and roared on to win 3-2, with two goals from Harmanpreet Singh and one from Rupinder Pal Singh.