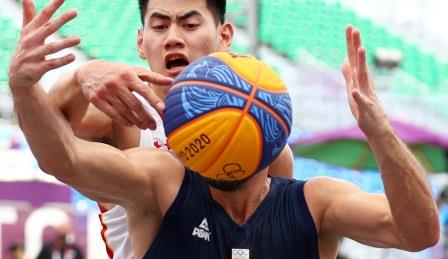 After a bruising first-round victory against China, where he came off a painful ankle twist to hit the game-winning shot, Bulut reflected on the long road that’s led him and his sport to an Olympic debut in Tokyo.

“We’ve been waiting for this moment for like five years now and without any support,” Bulut, 35, said, sweat dripping in the searing Tokyo heat. “This is the biggest tournament in my life, so you know it will be a pleasure to win any kind of medal, but we are aiming for the gold.”

Known as “Mr. Bulletproof,” the 6’3″ Serbian has been the top-ranked 3×3 player in the world for much of the fledgling sport’s history. Bulut has helped Serbia claim four of the six FIBA 3×3 World Cups that have been held so far.

With the United States men’s squad’s surprise elimination in the qualifiers, Serbia and Latvia appear to be the favourites in the men’s medal race. 3×3 is looking to boost its global profile as a faster paced, more compact alternative to basketball.

“Literally from the streets to the Olympic Games,” Bulut said about 3×3’s development. “The future is bright for this sport for sure.”

Against China, Bulut racked up a team-leading 11 points, including the game-clinching two-point jumper. In 3×3 basketball, played on a half court with three players on each side, a team wins by reaching 21 points or having the most baskets by the end of the 10-minute game clock.

The medal matches will take place on Wednesday after a round-robin tournament of eight teams each of men and women. Bulut said his ankle felt OK but would need some ice.