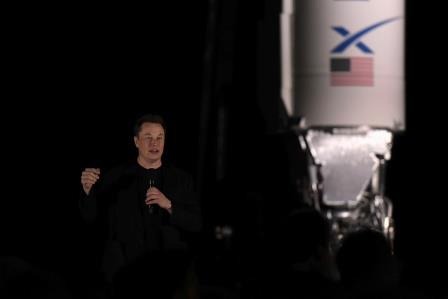 LOS ANGELES (US) – Elon Musk’s private rocket company SpaceX received an award of a $178 million launch services contract for NASA’s first mission delving on Jupiter’s icy moon Europa and taking into account whether it may host conditions suitable for life, the space agency said on Friday.

The Europa Clipper mission is touted to have a blastoff in October 2024 on a Falcon Heavy rocket, which is owned by Musk’s company, Space Exploration Technologies Corp, from NASA’s Kennedy Space Center in Florida, NASA said in a statement posted online.

The contract marked NASA’s latest vote of confidence in the Hawthorne, California-based company, which has carried several cargo payloads and astronauts to the International Space Station for NASA in recent years.

In April, SpaceX was awarded a $2.9 billion contract to build the lunar lander spacecraft for the planned Artemis program that would carry NASA astronauts back to the moon for the first time since 1972.

The company’s partly reusable 23-story Falcon Heavy, currently the most powerful operational space launch vehicle in the world, flew its first commercial payload into orbit in 2019.

NASA did not say what other companies may have bid on the Europa Clipper launch contract.

The probe is to conduct a detailed survey of the ice-covered Jovian satellite, which is a bit smaller than Earth’s moon and is a leading candidate in the search for life elsewhere in the solar system.

A bend in Europa’s magnetic field observed by NASA’s Galileo spacecraft in 1997 appeared to have been caused by a geyser gushing through the moon’s frozen crust from a vast subsurface ocean, researchers concluded in 2018. Those findings supported other evidence of Europa plumes.

Among the Clipper mission’s objectives are to produce high-resolution images of Europa’s surface, determine its composition, look for signs of geologic activity, measure the thickness of its icy shell and determine the depth and salinity of its ocean, NASA said.