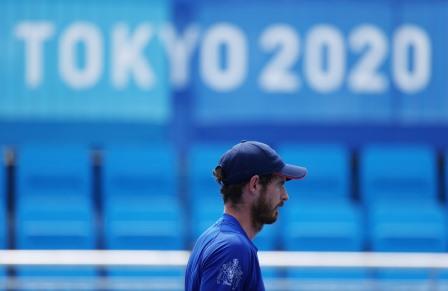 TOKYO (JAPAN) -Japan bagged skateboarding’s first ever gold medal and notched a surprise win in the pool on Sunday, in a day of high drama where 18-year-old Tunisian Ahmed Hafnaoui stunned swimming superpowers with victory in the men’s 400m freestyle.

Skateboarder Yuto Horigome, who grew up in the Tokyo ward where the event is being held, took gold at the debut of a sport once seen as a symbol of counter-culture. That followed surprise medal joy in the pool for Yui Ohashi in the 400m women’s medley.

The gold haul, which came after judoka Naohisa Takato won the host nation’s first gold on Saturday, offers organisers hope of boosting enthusiasm for the delayed Olympics among the Japanese public, who are labouring under a state of emergency in the capital amid elevated COVID-19 cases.

“I just can’t believe it. It’s a dream and it became true. It was great. It was my best race ever,” Hafnaoui said after he produced a blistering finish to pip Australia’s Jack McLoughlin, with U.S. swimmer Kieran Smith taking bronze.

The joy in the teenager’s face was in sharp contrast to the misery of Wimbledon champion Ash Barty upon her shock departure in the first round.

Britain’s twice Olympic champion Andy Murray didn’t even get that far. He pulled out of the tournament injured before his opening singles match.

The Australians got their moment in the pool in the last of the morning races when the Dolphins beat their own world record of 3:29.69 in the 4x100m women’s freestyle relay. Chase Kalisz delivered Team USA its first gold in the men’s 400m medley.

The shadows of the pandemic continued to hang over the Games. World number six golfer Bryson DeChambeau was replaced in the U.S. men’s team after testing positive for COVID-19 before his departure. The Dutch rowing coach also tested positive as Olympic organisers reported 10 new COVID-19 cases, bringing the total disclosed to 132.

The International Olympic Committee (IOC) insisted that masks were a “must to have” at Tokyo medal ceremonies after swimmers were seen taking off theirs on the medal podium and hugging other competitors in violation of COVID-19 rules.

“It’s not a nice to have. It’s a must to have,” said IOC spokesman Mark Adams.

“This gold medal give hopes and dreams to many children and young people. There are also reports that many families are really delighted,” Suga said in the call.

Japanese tennis superstar Naomi Osaka, who lit the Olympic cauldron on Friday at the opening ceremony, started her first match against China’s Saisai Zheng at the Ariake Tennis Park.

With temperatures rising above 30 degrees Celsius (86 degrees Fahrenheit) in Tokyo, skateboarders were sweating at their historic Olympic debut, part of organisers’ attempts to broaden the appeal of the world’s largest sporting event.

Competitors at the unshaded Ariake Urban Sports Park on the Tokyo waterfront said the heat was already unbearable at 9 a.m. and that it was a distraction from performing their tricks.

Yahoo Tenki, one of Japan’s most popular weather apps, offered caution over the risk of heatstroke, saying users should “avoid exercising under the sun” and “minimise vigorous exercise”.

Surfing also made its Olympic debut on Sunday, with competitors meeting with a strengthening swell after flat conditions a day earlier at Tsurigasaki Surfing Beach in Chiba prefecture, which borders the capital.

Simone Biles was also about to get into action on Sunday, setting the stage for a gymnastics gold medal assault that could enshrine the American in the pantheon of Olympic all-time greats.

Biles and her US. team mates go into the qualification competition as the gold medal favourites in almost every event.

The 24-year-old, who has won every all-around competition she has contested since 2013, needs three more medals to move past Shannon Miller as the most decorated U.S. gymnast.