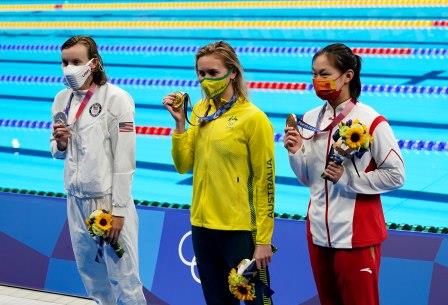 TOKYO (Japan) – Australia’s Ariarne Titmus drew first blood in her Olympic showdown with American Katie Ledecky on Monday after her brilliantly timed swim secured a famous victory in the 400m freestyle at the Tokyo Games.

Olympic swimming has, of late, lacked the excitement of hyped-up, top tier big rivals going head-to-head but this encounter certainly lived up to its billing.

The rivalry between the pair caught fire at the 2019 World Championships when Titmus stunned an unwell Ledecky to win the 400 freestyle title.

Monday’s thrilling race has set the swimming competition alight and there is much more to come with the pair set to clash again in the 200 freestyle on Wednesday and then again in the 800 on Saturday.

Ledecky, a five-times Olympic gold medal winner, grabbed an early lead and held it until the 350m mark when the 20-year-old Titmus edged ahead and never looked back.

“She definitely swam a really smart race. She was really controlled up front,” the American said.

“I felt smooth and strong. I looked up at 300 metres and she was right there, so I knew it would be a battle to the end. I didn’t feel like I died or really fell off. She just had a faster final 50m or 75m and got her hand to the wall first.”

Titmus, unsurprisingly, was less in a mood for such a calm analysis of the race.

“I can’t believe, it. I’m trying to contain my emotions. To come here and do the job, I’m over the moonm” she gushed.

“I thanked her (Ledecky), I wouldn’t be here without her. She set this incredible standard. All credit to her for the swimmer she is,” she added.

“In the race I tried to stay as composed as I could … and can’t believe I pulled it off.”

Titmus’s coach Dean Boxall certainly believed it and his wild celebration in the stands went viral on social media.

“He means everything to me,” said Titmus.

“Coming into this race we knew what we had to do.

“We didn’t discuss what I wanted to do in the pool. It was more of a ‘have fun’ moment. We practised this for so long. I just knew what I had to do when I got out there.”

Ledecky will be hurt by this loss but it would be unwise to write her off. Her dominance in the 800 free is likely to bring at least one more gold to add to her collection and she said the rivalry would push her on to better things.

“I think we have both helped each other, it is great for this event and all the freestyle events to have some really great competitors,” said the American.

“Each race is a tough race. When we meet up it is always a great race. I hope we have many more great races this week and in the future.”