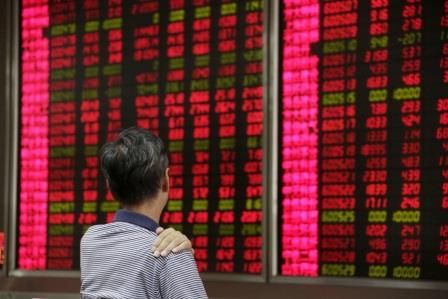 LONDON (UK) – Stock markets fell on Monday as concerns over tighter regulations in China mounted amid caution ahead of a huge week for US corporate earnings and the Federal Reserve meeting.

They key event of the week for markets is the Fed meeting, where investors will look for Chair Jerome Powell’s comments about the timing for the start of tapering of the central bank’s asset purchases.

Forecast-beating earnings have helped fuel this year’s stock rally but the question is whether it can last or if the optimism has been priced in.

MSCI’s broadest index of Asia-Pacific shares outside Japan dropped 2.1% to its lowest since December.

Elsewhere, bitcoin jumped as much as 12.5% to its highest since mid-June on hopes of growing acceptance of the cryptocurrency including from Amazon and as short sellers covered their positions.

“While we see the Fed as being more hawkish this week, it is only one of several speed bumps ahead in what is an environment supportive for risk,” said Sebastien Galy, a strategist at Nordea.

“The current profit taking induced in part by pressure on China’s Tech is unlikely to last long as US stocks should again be bought on the dip.”

Weighing on sentiment on Monday, however, was China. Chinese blue chips shed 4.4% to their lowest since December, in what was also the biggest daily decline in more than a year, as the education and property sectors were routed on worries over tighter government rules.

Investors have been pulling money out of Asian and emerging market stocks and adding to their US holdings, supported by forecast-beating earnings – with just over one-fifth of the S&P 500 having reported, 88% of firms have beaten the consensus of analysts’ expectations.

Oliver Jones, a senior markets economist at Capital Economics, noted US earnings were projected to be roughly 50% higher in 2023 than they were in the year immediately prior to the pandemic, significantly more than was anticipated in most other major economies.

“With so much optimism baked in, it seems likely to us that the tailwind of rising earnings forecasts, which provided so much support to the stock market over the past year, will fade,” he cautioned.

The week is also packed with U.S. data. Second-quarter gross domestic product is forecast to show annualised growth of 8.6%, while the Fed’s favoured measure of core inflation is seen rising an annual 3.7% in June.

Bond markets have remained remarkably untroubled by the prospect of eventual tapering. Yields on US 10-year notes have fallen for four weeks in a row – they slipped another 6 basis points to 1.229% on Monday.

The drop has done little to undermine the dollar, in part because European yields have fallen even further amid expectations of continued massive bond buying by the European Central Bank.

“These developments compound fears about the medium-term outlook for global growth, which is one of the factors that has been pushing yields down,” he said.

Oil prices have been buoyed by wagers that demand will remain strong as the global economy gradually opens and supply stays tight, but they fell on Monday.