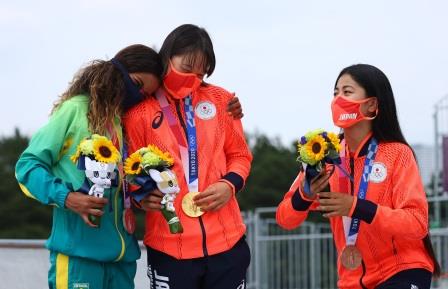 Did we ever imagine an Olympic podium with three teenage girls aged 13,13 and 16 wearing the mighty Gold, Silver and Bronze medals around their young necks? Yes, it happened at the Tokyo Olympics 2020.
It was the rewards for having pulled-off tricks with their skateboards that most kids their age only got to witness on social media.
After decades in the shadow of men’s skateboarding, the future for this daring sport helmed by trailblazing women suddenly looked brighter than ever at the Tokyo games on Monday.

Japanese teenager Momji Nishiya won the gold in the women’s street skateboarding competition, giving the host nation yet another gold in the street event after Yuto Horigome won the men’s event. Though she initially stumbled and missed the landings on her first two tricks, Nishiya nailed her last three. Rayssa Leal of Brazil won silver and Funa Nakayama of Japan clinched the bronze.

But around the world, girls are trying to convince their parents that they too should be allowed to skate and point towards the 13-year-old from Osaka as an Olympic sized example of skateboarding’s possibilities. The event was celebrated as a win for women by many of the 20 competitors.