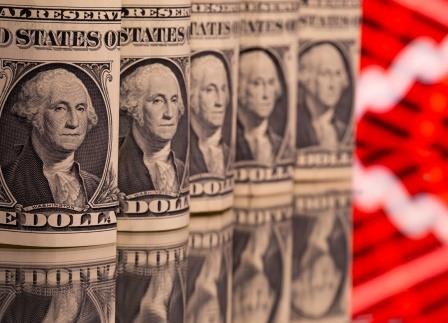 LONDON (UK) – The US dollar resumed its march towards a 3-1/2 month high as a Fed policy meeting got underway with risk appetite broadly subdued. The Australian dollar and the Chinese currency was left struggling due to a widening regulatory crackdown in China.

The dollar has rallied more than 4% from 2021 lows of below 90 hit in late May as a sudden drop in U.S. Treasury yields forced investors to cut their short dollar bets. A sharp drop in U.S. yields boosts the safe-haven appeal of the greenback.

This marks a significant turnaround from the first quarter of 2021 when hedge funds ramped up bearish bets on expectations that record low US interest rates would hobble the dollar.

Stephen Jen, who runs hedge fund Eurizon SLJ Capital, notes the real money community is “still significantly short the dollar, even though the leveraged community has by and large flattened their dollar positions”.

“Thus, if euro/dollar breaks below 1.17, there could be large capitulation trades sending the cross to the 1.11-1.13 zone later this year,” he wrote in a note to clients.

But despite some concerns about whether the dollar’s rise is a sign of a new round of weakness for its major rivals, broader currency market volatility remained muted. A gauge of market volatility held around 6 vol, near its lowest levels since the start of 2020.

More gains for the dollar are in store if the Fed strikes a hawkish note at the outcome of a two-day policy meeting on Wednesday although market consensus believes that is unlikely.

The Fed meeting comes after a study released last week by the National Bureau of Economic Research which showed the coronavirus-induced US recession lasted only two months.

MUFG strategists said the shortness of the recession could lead the Fed to reverse its policy stance more quickly but that this seems unlikely as the new monetary policy strategy framework allows for a less aggressive response.

Elsewhere, concern at the spread of the Delta coronavirus variant and a selloff in Hong Kong stocks weighed on risk-oriented currencies.

The Australian dollar weakened more than 0.5% while the offshore version of the Chinese currency fell past the 6.50 per dollar line.

Sterling too weakened 0.3% at $1.3773 as broader market concerns offset early data that seemed to show an ebb in surging COVID-19 cases in Britain in spite of the removal of many social curbs last week.