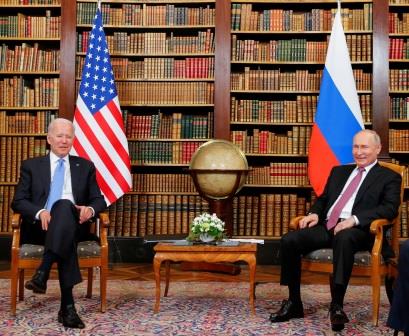 GENEVA (Switzerland): With a fresh mandate from their presidents who held a summit in Geneva last month senior US and Russian officials began talks on Wednesday on strategic nuclear stability, .

US Deputy Secretary of State Wendy Sherman and Russian Deputy Foreign Minister Sergei Ryabkov headed their respective delegations at the meeting at the US diplomatic mission in Geneva.

US President Joe Biden and Russian President Vladimir Putin, whose countries hold 90% of the world’s nuclear weapons, agreed to launch a bilateral dialogue on strategic stability to “lay the groundwork for future arms control and risk reduction measures”.

The exact scope of the one-day talks was not made public but analysts expected it to be the start of a process.

“The talks must lead to real and substantial nuclear reductions. Anything less would be an irresponsible failure,” Daniel Hogsta of the Nobel-prize winning International Campaign to Abolish Nuclear Weapons, told Reuters.

Andrey Baklitskiy, senior research fellow at the Center for Advanced American Studies at Moscow State Institute of International Relations, said: “It will be almost a year since the last meeting in this format. We are starting with a new US administration, starting pretty much from scratch.

“It’s just meet and greet and try to establish some basic understandings,” he told reporters in Geneva.

Russia in January approved a five-year extension of the New START nuclear arms control treaty with the United States days before it was set to expire. The treaty limits the numbers of strategic nuclear warheads, missiles and bombers that Russia and the United States can deploy.

The two sides were expected to discuss which weapons systems and technologies are of greatest concern, Baklitskiy said.

“For example, Russia still has concerns with US modification of heavy bombers and launchers to launch ballistic missiles, and that’s been there for a while now,” he said.

The Biden administration has asserted that Russia has engaged unilaterally in low-yield nuclear testing, in violation of a nuclear testing moratorium, he said, adding: “That’s still on the table.”