Olympics-America’s Kendricks tests positive for COVID-19, out of games 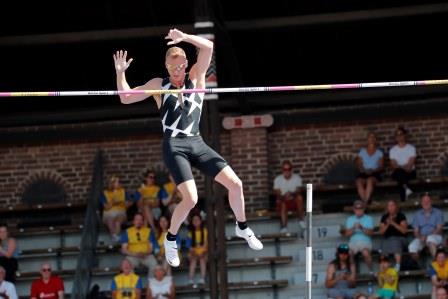 TOKYO (Japan) -American double world champion pole vaulter Sam Kendricks and rival German Chiaraviglio of Argentina were ruled out of the Olympics on Thursday after testing positive for COVID-19, sending a chill through the Games as infections spiked again in the host city.

U.S. officials confirmed that Kendricks was ruled out of the Games due to a positive test, prompting members of the Australian athletics team to briefly isolate in their rooms.

Swedish world record-holder Armand Duplantis told reporters he had not been in contact with his American rival.

“I have been super lucky just not to have come into contact with him,” he said. “All the pole vaulters are pretty spooked out right now.”

Argentina’s Chiaraviglio confirmed on social media that he was out of the Games as well, and was isolating in a hotel.

In Tokyo, where pandemic restrictions are mostly voluntary outside the “Olympic bubble”, daily infections hit a record 3,865, up from 3,177 a day earlier.

Members of the Australian athletics team briefly isolated as a precaution after Kendricks’ infection was announced. They were later cleared to return to their regular routines.

Games procedures state that athletes who are contact-traced and have not yet competed are isolated from the rest of their squad. They then have to be tested six hours prior to their competition and return a negative result in order to compete.

Japan’s top medical adviser urged the government to send a “clearer, stronger message” about the growing risks from the pandemic, including to the medical system.

“The biggest crisis is that society does not share a sense of risk,” top medical adviser Shigeru Omi told a parliamentary panel. “I want the government to send a stronger, clearer message.”

The hospitalisations and infection spike add to worries about the Games, which are taking place under unprecedented conditions including a ban on spectators in most venues.

Only 26.5% of residents of Japan are fully vaccinated, and the rollout has hit supply snags recently. More than 60% of Tokyo hospital beds available for serious COVID-19 cases were already filled as of Tuesday, city data showed.

Many Japanese are worried that the influx of athletes and officials for the Games will add to the surge, while experts have warned that holding the high profile sports event sends a confusing message about the need to stay home.

Olympics organisers have reported 193 COVID-19 cases related to the Games, a miniscule number given the tens of thousands of people involved in the event.

Athletes, staff and media have to follow strict rules to prevent any spread of the virus from inside an “Olympic bubble”.