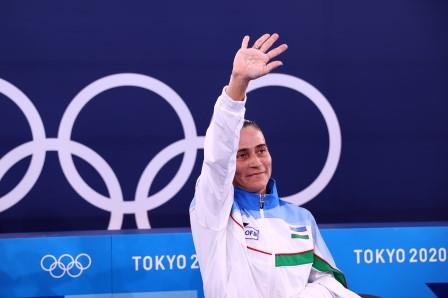 The Tokyo2020 Games has so far been a win for women in sports. They took bold steps to make their choices clear in a brutal environment that has refused to budge its rules and laws in favour of aesthetics and toxic sportsmanship. From 13-year-old young girls who stood on the podium to receive their medals to a 46-year-old gymnast taking her last bow, this Olympics has already made it’s list of memorable moments.

Oksana Chusovitina started her Olympic journey 30 years ago. Popular US gymnast Simone Biles was not even born then. Oksana first competed in the 1992 Barcelona Games.

At 46 years of age Oksana has proven to the world that gymansts do not necesarily have to fade early. It’s a tough sport and it shows on their body quite early as well. The sporting world looked on in awe as Oksana defied all odds before she bid farewell. This will be her last Olympics.

With fans and spectators barred from the venue due to the pandemic, Oksana missed out on a rousing farewell. But coaches and fellow gymnasts made up for it, they gave her a standing ovation on Sunday for her persevering through and owing an extraordinary career.

“I didn’t look at the results (today), but I feel very proud and happy. I’m saying goodbye to sports. It’s kind of mixed feelings. These were tears of joy because so many people were supporting me,” said Chusovitina. She added that she would have loved to have ended her career in the presence of spectators.

“I had been preparing for things to end here, but it’s impossible to be fully ready for ending your career. My time in gymnastics dragged on, now there isn’t much time left,” she said with a chuckle.”

Chusovitina become the Soviet all-around champion at 13 and the world champion on floor in 1991. She won gold in the team event at the 1992 Barcelona Games and silver in the vault in Beijing 16 years later when she had temporarily switched her allegiance to Germany. Chusovitina’s career also embodies the political upheaval that rocked the Soviet Union. After competing under the Soviet flag, she went on to represent the Commonwealth of Independent States, the Unified Team, and her native Uzbekistan after the Soviet collapse.

She later competed for Germany, where she moved to seek treatment for her son’s leukaemia, before returning to compete for Uzbekistan.

At the London Olympics in 2012 she had announced her retirement, only to change her mind just 24 hours later.

Chusovitina said her longevity had been fuelled by an intense passion for gymnastics, “There is no secret,” said the Uzbek, who had made it into the vault final at the Rio Olympics five years ago. “I just love gymnastics and no one ever forced me to do it. I do it with pleasure.”