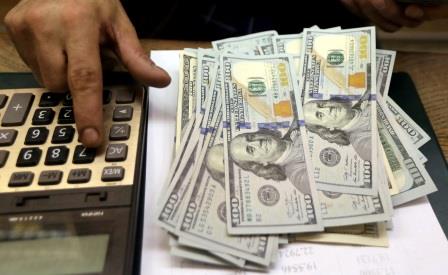 LONDON (UK): The dollar traded near a one-month low on Friday and was set for its worst weekly performance since May as dovish remarks by the U.S. Federal Reserve together with underwhelming economic data took the steam out of a month-long rally.

The dollar index, which measures its performance against a basket of six other currencies, was last at 91.845, after hitting 91.775, a level not seen since June 29.

The dollar’s downtrend began after Fed Chairman Jerome Powell wrong-footed bulls following a policy meeting this week by saying that rate increases were “a ways away” and the job market still had “some ground to cover”.

“The Fed is focused on jobs and isn’t concerned about inflation,” said Joel Kruger, currency analyst at LMAX. “The market isn’t pricing a taper now until the end of the year, if at all, and China has calmed investor nerves around regulatory crackdowns,” he said.

“These are the primary drivers of markets into Friday and the net result has been one of broad-based U.S. dollar declines and fresh record highs in US equities.”

While the US economy expanded at a 6.5% annualised rate in the second quarter, boosted by massive government aid, growth fell short of economists’ expectations for an 8.5% acceleration.

The dollar held near a two-week low against the safe haven Japanese yen at 109.52, while the euro climbed to a one-month high against the U.S. currency and last traded at $1.19.

The euro zone economy grew faster than expected in the second quarter, pulling out of a recession caused by the COVID-19 pandemic, while inflation shot past the European Central Bank’s 2% target in July.

“In general, the eurozone’s rebound from its technical recession should not be a game changer for the ECB (European Central Bank) expectations or for the euro,” ING strategists said in a note. “The short-term fate of euro/dollar still looks mostly tied to the U.S. dollar and global dynamics,” they said, adding that fresh signs of turbulence from Asia suggested it might be too early for the euro to return above $1.19.

Elsewhere, the Chinese yuan has recovered most of its Tuesday plunge to trade at 6.4566 per dollar.

Sentiment was helped by China’s attempt to calm frayed investor nerves by telling foreign brokerages not to “overinterpret” its latest regulatory actions.

Both the Australian and New Zealand dollars, reliant on world and Chinese economic growth, hovered near two-week highs.

The British pound was close to its highest in over a month helped by the US dollar’s weaker tone and a fall in coronavirus cases in Britain.

Investors will keep a close eye on several US indicators due later in the day including second-quarter employment cost index, personal income and spending for June and the University of Michigan consumer sentiment index for July.

Mirabai Chanu: The Girl on Fire

Afghans who worked for US during war airlifted

Afghans who worked for US during war airlifted