Mirabai Chanu: The Girl on Fire 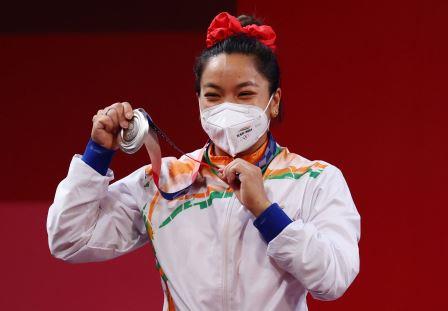 After years of perseverance, Weightlifter Mirabai Chanu has has brought pride to the nation by clinching silver at the Olympic Games. Asian Herald’s Special Sports Correspondent shares Chanu’s story of struggle and sheer will power

A twelve-year-old girl went on her daily trip to collect firewood along with her elder brother, Saikhom Sanatomba Meitei. While he was unable to pick up a bundle of wood they’d collected, she lifted it effortlessly and carried it all the way home.
Years later, in 2021, this story would make the rounds in Indian media and social media as Indians celebrated the young girl- Saikhom Mirabai Chanu for opening India’s account at the 2021 Tokyo Olympics with a Silver medal in the 49kg women’s weightlifting category.

Mirabai Chanu was born in Nongpok Kakching, a small village located 20 kilometres from the city of Imphal. The last of six siblings, Mirabai Chanu, spent most of her childhood helping her mother out on the farm for hours during the day.
According to Chanu’s mother, Saikhom Tombi Devi, her youngest daughter would cut, gather and carry firewood on her head from the nearby hills, carry pails of water, and help her out with the heavy work at the farm while the rest of her siblings spent their time studying or weaving.
Chanu’s parents struggled to support their six children with the meagre income earned by her father, Saikhom Kriti Singh, who worked in the Manipur Public Works Department. Her mother used to run a small shop in the village to make ends meet.
As a child, Chanu had already made up her mind to become a sportsperson. Her first choice was archery. But, on the day she visited the Archery Centre, it was closed. On the same day, Chanu got to witness a few Weightlifters training and that sparked her interest in the sport. Reading about Manipuri weightlifter Kunjrani Devi and her career as an international weightlifter also served as an inspiration for young Chanu.
Chanu had to travel more than 20 kilometres each day to train at the Khuman Lampak Stadium in Imphal. Since her training was held in two sessions- morning and evening, she would spend the afternoons at the stadium itself along with her coach, Anita Chanu- a former Asian Medallist.
She would bring along homemade steamed black rice and vegetables for lunch, to ensure her daily meals were rich in carbohydrates and minerals. Her journey to and from the stadium every day was a struggle in itself as Chanu often did not have the money for a full ride and would have to walk the distance. Her siblings would help her out by giving her their savings to cover her transportation and training expenses.

It was not easy and she had to cross multiple hardships like the limitation in resources, poor financial situation, adjusting her training schedule to balance it along with school. But, Chanu remained resilient and trained consistently.
During the initial period of her training, Chanu would lift pieces of wood. Within a short period, she astounded her coach by lifting more than 70 kilograms- almost twice her weight.
She won her first National medal in the year 2009 and rose to fame when she won the silver medal in the 2014 Commonwealth Games at Glasgow. Despite massive expectations, her performance was anticlimactic at the 2016 Rio Olympics when she failed at all three Clean and Jerk attempts. Chanu redeemed herself a year later at the 2017 World Championship by becoming the first Indian weightlifter in over two decades to win a gold medal. Months later, she won gold at the 2018 Commonwealth Games held in Gold Coast, Australia.
In 2018, she was honoured with the prestigious Rajiv Gandhi Khel Ratna award and Padma Shri, by the Indian government. In the same year, Chanu’s career hit a pause when she suffered a back injury. The injury prevented her from participating in the Asian Games held that year.
She made a comeback a year later at the 2019 Asian Weightlifting championship, finishing fourth and missing the bronze medal by a small difference.

Chanu trained long and hard to claim her medal in the Tokyo Olympics, despite the turbulent times caused by the Coronavirus pandemic. She had to undertake restrictive diets to maintain her weight and stay away from her family for the sake of training. Her perseverance and resilience, despite the many obstacles along her way, made it possible for Chanu to win silver.
Despite wanting to quit the sport after the 2016 Rio Olympics and her injuries, Chanu never gave up. She kept persevering against all odds and bagged India’s first medal in the 2021 Tokyo Olympics and made the entire country proud.