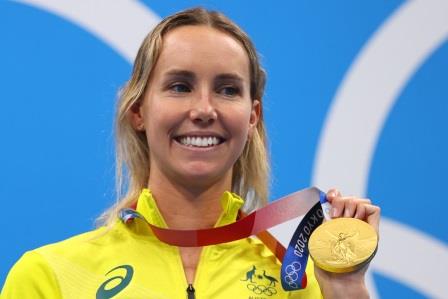 TOKYO (Japan): Emma McKeon was over the moon after winning gold in the Olympic women’s 100m freestyle on Friday.

McKeon, who had bagged gold in the 4×100 freestyle relay and bronzes in the 100 butterfly and 4×200 relay, said having the gold medal around her neck was what she came for.

“I’ve never won an Olympics or worlds individual title,” said McKeon. “That’s what the Olympics is all about, to be able to stand on top of that podium.”

The 27-year-old from Wollongong in New South Wales went into the race with the fastest qualifying time and came home in 51.96 seconds, an Olympic record.

“I still can’t believe I’ve just won a gold medal, the emotions will really come out when I get back to Wollo,” she added.

McKeon, whose father and brother both swam at the Olympics, was never headed in the race, finishing 0.31 seconds ahead of Hong Kong’s Siobhan Haughey with Australia’s Cate Campbell third.

“I’m so proud of you,” Campbell told McKeon as they hugged in the pool.

McKeon won four medals in Rio, including gold in the 4×100 relay, but came up short in the individual events.

However, she said she never doubted herself for a minute. Later on Friday, McKeon smashed her 50m freestyle heat with an Olympic record of 24.02, ranking her first going into the semi- finals on Saturday.

“I never started to wonder or lose belief. I definitely had belief in myself and that built over the last two years.

“To finally see that ‘1’ for my name in an individual spot – I am over the moon.”

Campbell, who also raced the 50m freestyle heats in a time of 24.15, said over the past five years she had done a lot of work and processing.

“There are many things that have changed. I’m incredibly proud of who I am outside of the swimming pool, I am a person first and a swimmer second and sometimes that gets lost,” said the triple Olympic relay gold medallist.

“The constant desire to keep performing and to keep winning. It can get all consuming.”