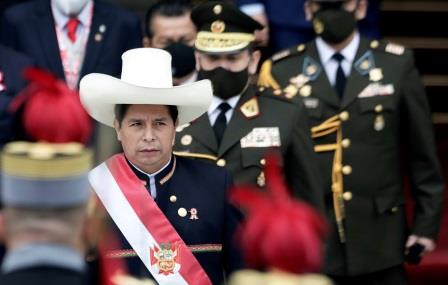 Castillo named Guido Bellido, a hardliner and Marxist from the Andean city of Cuzco who is little known in Lima circles, as prime minister on Thursday, initially dampening investor hopes for a more moderate cabinet. The move was a blow to bond markets and the sol currency. But the swearing in later in the day of moderate left-wing economist Francke, a top adviser to Castillo who had helped the recently elected president soften his image, appeared aimed at soothing jittery investors.

Prime Minister Bellido earlier in the evening had expressed on Twitter his “full support” for the more moderate Francke, saying they would “work together for the country.”Francke, a close confidant of Castillo and long a favorite for the finance job, a day earlier had left a ceremony to swear in newly appointed cabinet members just minutes before it started, ratcheting up the drama and leaving investors who favored Francke for the job in the lurch.
Most of the rest of Castillo’s cabinet was sworn in onThursday. Ivan Merino, a little known mining specialist close to FreePeru, was tapped to oversee the sprawling metals industry in the world’s No.2 copper producer. Castillo, a self-described Marxist-Leninist, campaigned on promises to hike taxes on miners to underwrite health and education reforms. Markets remained on edge throughout the day Friday as investors anxiously awaited Castillo’s choice for the key finance minister position. “Don’t worry. Everything’s going to be fine,” Bellido saidin brief comments to reporters early in the day. Investors were not reassured. Peru’s currency, the sol, tumbled to a record low in its largest daily decline in over seven years.

The local stock index dropped almost 6% at its session low and posted its lowest close since November.Castillo, inaugurated on Wednesday, took to Twitter in theearly hours of Friday to defend his new government. “Our cabinet belongs to the people. It answers to the people,” Castillo wrote. “Our commitment is to Peru and to no other interest than todedicate each and every one of our efforts to build a more just,free and dignified country. We will not disappoint your trust.” Investors are growing wary about Peru’s prospects underCastillo, who won last month’s election against conservativeKeiko Fujimori by a razor-thin margin. After a campaign in whichhis pledges to distribute wealth more evenly spooked markets but won him votes from Peru’s rural poor, he had in recent weeks appeared to take a more moderate tack. Political wrangling between the radical leftwing arm of hisFree Peru party and more centrist allies followed his win.