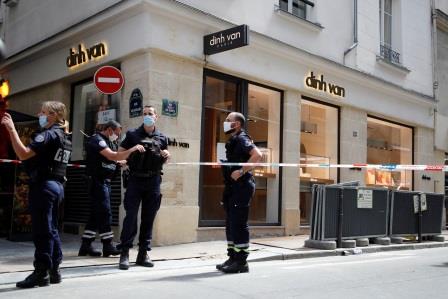 PARIS (France): Two people armed with a Taser and tear gas robbed a Dinh Van jewellery store in central Paris before fleeing on foot on Friday. According to sources as much as 2 million euros worth of goods was stolen.

The robbery comes days after a Chaumet store was held up close to the Champs-Elysee avenue. Robberies at jewellery stores in the French capital are not uncommon during the quieter summer months.

The two police sources said the robbers were carrying a Taser, tear gas and a hand gun. Dinh Van confirmed that their store in the Marais district was robbed, but said it was too early to say how much had been taken.

“We have from time to time a wave of these robberies” Yoann Moras, an official from police union Alliance, told BFM TV.

The Chaumet jewellery store was robbed on Tuesday with the assailant escaping on a scooter. Two suspects were later arrested with most of the roughly 2 million euros ($2.37 million) worth of jewellery recovered.