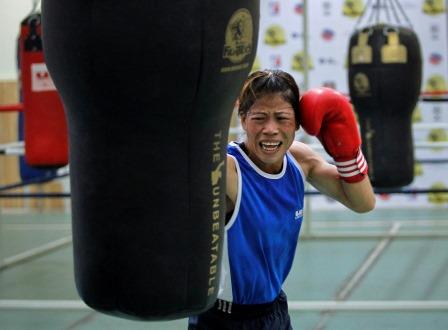 India's boxer MC Mary Kom punches a bag during a training session at Balewadi Stadium in Pune, about 190 km (118 miles) from Mumbai, March 12, 2012. Mary Kom was the face of the campaign to get women's boxing into the Olympics and the Indian mother of two will be competing at the world championships in China in May aiming to book her spot at the London Games in the 51kg category. Picture taken March 12, 2012. REUTERS/Danish Siddiqui (INDIA - Tags: SPORT BOXING OLYMPICS)

MC Mary Kom’s cheerfulness after her loss to Colombia’s Ingrit Valencia in the 51kg pre-quarterfinals was hailed on social media and people take it as a sign of the boxer’s magnanimity in conceding defeat. However, Mary thought the bout had been awarded to her! Mary lost the bout 2-3 in a split decision even though she won the last two rounds after the first round went to Valencia (4-1).

During the media interaction soon after the bout, she was very peppy, as a boxer is after a win. When she was asked if she would continue to box, she cheerfully indicated she would. In fact, for over an hour she thought she had won and that another win would put her in contention for a medal.

Her coach Chhote Lal Yadav and Mary were in the dope control premises to give her sample for testing, and she kept asking him: “Why are you saying that I have lost?” It was then she learned she had lost.

“How did they give it (result) to her? I won the last two rounds convincingly,” Mary continued to argue with Yadav.

“She thinks she had won… She thinks she was asked to give her sample as she won!” Yadav said in exasperation, adding to Mary: “Why did you think you won? The judges gave her (Valencia) the fight.

Mary’s certainty about her win could be gauged from the fact that she showed no sadness during her media interaction. Asked whether she would continue to box, the 38-year-old had replied that rules might stop her from doing that. “I have not read them personally but if there is a cap (age restriction) then it becomes difficult for me,” she said.

She also commended Valencia as a good boxer who still had time to enhance her skills.