Olympics-IOC to look into gesture used by Saunders on podium 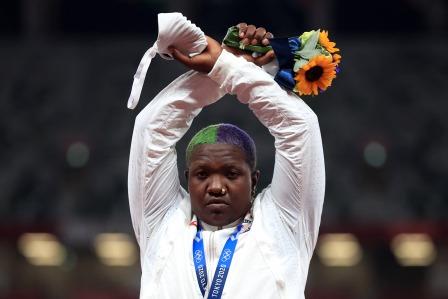 TOKYO (Japan): The International Olympic Committee is looking into the gesture used by US athlete Raven Saunders after the shot put silver medallist raised her arms in an X above her head.

The IOC is in contact with World Athletics, the international governing body for the sport, and the United States Olympic and Paralympic Committee, IOC spokesman Mark Adams told a news conference on Monday.

The IOC last month relaxed its Rule 50, which had forbidden athletes from any protests. It now allows them to make gestures on the field, provided they do so without disruption and with respect for fellow competitors.

However, the threat of sanctions still remain if any protests are made on the podium during the medal ceremony.

Saunders made the gesture on the podium after taking her maiden Games medal on Sunday.

“Let them try and take this medal,” Saunders said in a late night post on social media in an apparent reference to the IOC’s rules restricting protests.

“I’m running across the border even though I can’t swim,” she wrote on Twitter, ending the post with an emoji of a face with tears of laughter.

Her gesture was to support the downtrodden, she indicated by retweeting an article about the action by news website the Grio.

“It’s the intersection of where all people who are oppressed meet,” Saunders was quoted in the article as saying.

After winning the medal on Sunday morning, Saunders said she hoped to continue to inspire and motivate the LGBTQ community, African Americans, Black people around the world, and those struggling with mental health. She had previously spoken about having major issues with mental health and suffering bouts of depression.

The Tokyo Games has seen its fair share of protests with the captain of the German women’s hockey team wearing an armband in rainbow colours in solidarity with LGBTQ communities during the team’s matches.

The Australian women’s soccer team unfurled an indigenous flag prior to their opening match and several other women’s teams took a knee in a signal against racial inequality.

Costa Rican gymnast Luciana Alvarado raised a fist while taking the knee at the end of her routine, in support of racial equality.