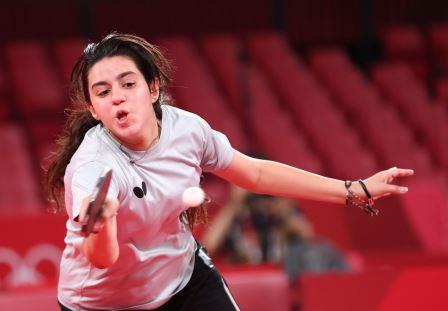 At the age of five, when most children run around the playground with their friends, little Hend Zaza followed her brother’s footsteps and took up table tennis coaching.
Zaza was born on 1st January 2009, as the youngest of five siblings, in Hama, Syria. Her father is a former soccer player and is currently working as a gymnasium instructor. She was inspired by her older brother to join the sport and began training with him, and other players who were all older than her, in the year 2014.
She trained under Adham Aljamaan in a hall with very limited facilities. Zaza found refuge in training amid the horrors of the Syrian Civil War and terrorist attacks that were happening around her.

Zaza’s training was interrupted frequently by power outages restricting her training time to daylight. On multiple occasions, the young talent was unable to travel to games because of the distressing situation in her home country. Buying paddles and balls for training became a challenge during times of conflict. Despite all of these hardships, Zaza remained resilient and worked hard to improve her craft.

In the year 2016, just two years into her training, Zaza played at the Asia Hopes Week Challenge in Qatar, where her extraordinary talent was discovered by Eva Jeler, an International Table Tennis Federation (ITTF) official. Zaza now plays for the Al-Muhafaza Table Tennis Club in Damascus.

Zaza is the first Syrian table tennis player to qualify for the Olympics. She qualified for the games by beating 42-year-old Mariana Sahakian, at the West Asian Olympic Qualifier Tournament in Jordan, last year. While speaking to the ITTF about her qualification, the then 11-year-old said it was a “gift to my country Syria, my parents, and all my friends.”

In 2020, after travel restrictions imposed due to the covid-19 pandemic were lifted, Zaza was invited by the Chinese Olympic Committee to train with the country’s leading players.
Her Olympic debut caught a lot of attention as she is the youngest athlete at the 2021 Tokyo Olympics. Zaza faced 39-year-old Liu Jia, a former European Champion representing Austria, in her first-round match. Despite losing, she maintained a calm countenance throughout the game. Post the match, she even promised to make a stronger comeback at the next Olympics.
Zaza’s opponent Liu Jia was full of praise for her younger rival. While talking of the younger girl, she said “There’s sport and there’s life. There are people who have to endure difficulties. They are amazing; it hasn’t been easy for them. She’s a girl too young to be in an Olympics at 12, in my heart I really admire her.”
Zaza’s family is extremely supportive of her dreams despite the many obstacles in her path due to the war-ridden state of Syria. Her father has arranged for private tutors so that she can balance between her education and training.
Though Zaza’s first Olympic stint was rather short-lived, there is no doubt that the young paddler is packed with potential and is definitely a name to look out for in the coming years.