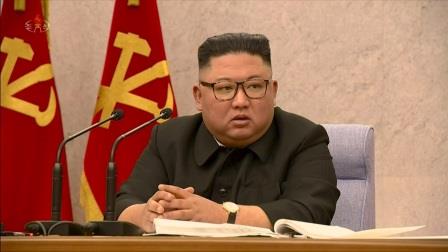 FILE PHOTO: North Korean Leader Kim Jong Un speaks at the second plenary meeting of the 8th Central Committee of the Workers' Party in this still image taken from a KRT footage on February 12, 2021. KRT TV via REUTERS

SEOUL (S.Korea): In order to restart denuclearisation talks with the United States, North Korea wants international sanctions banning its metal exports and imports of refined fuel and other necessities lifted, according to South Korean lawmakers.

The North has also demanded the easing of sanctions on its imports of luxury goods to be able to bring in fine liquors and suits, the lawmakers said after being briefed by South Korea’s main intelligence agency.

The briefing came a week after the two Koreas restored hotlines that North Korea suspended a year ago.

North Korea’s state-run media made no mention on Tuesday of any new request for the lifting sanctions to restart talks.

The South Korea legislators said North Korean leader Kim Jong Un and South Korean President Moon Jae-in had both expressed a willingness to rebuild trust and improve ties since April, and Kim had asked to reconnect the hotlines.

They also said North Korea was in need of some 1 million tons of rice, as its economy was battered by the coronavirus pandemic and bad weather last year.

South Korea’s central bank said last week North Korea’s economy suffered its biggest contraction in 23 years in 2020 as it was battered by U.N. sanctions, COVID-19 lockdown measures and the weather.

The U.N. Security Council has issued a wide range of sanctions against North Korea, including entities and individuals in the reclusive country, for pursuing its nuclear and ballistic missile programmes in defiance of U.N. resolutions.

The United States, Japan and South Korea have also issued sanctions on North Korea but they are not binding on other countries.

A senior official in President Joe Biden’s administration told media in March that North Korea had not responded to behind-the-scenes diplomatic outreach since mid-February.

North Korea has not tested a nuclear weapon or its longest-range intercontinental ballistic missiles (ICBMs) since 2017, ahead of an historic meeting in Singapore between leader Kim Jong Un and Trump in 2018.

That meeting and two subsequent ones failed to persuade North Korea to give up its nuclear weapons or its missile programme.

Independent U.N. sanctions monitors found that North Korea maintained and developed its nuclear and ballistic missile programmes throughout 2020 in violation of sanctions, helping fund them with some $300 million stolen through cyber hacks.