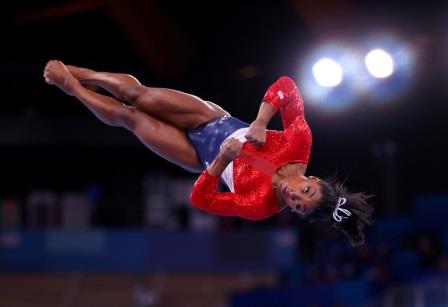 TOKYO (Japan): Simone Biles was always expected to be a headliner at the Tokyo Olympics, coming into the Games predicted to top her medal haul from Rio and become one of the most decorated female Olympians of all time.

Instead, the script changed dramatically.

The following is an outline of events at Biles’ Tokyo Olympics:

JULY 17 – Biles, bored with going merely between her hotel and training centre, posts on social media asking fans to “tell her a secret,” dispensing advice like an agony aunt.

JULY 19 – Kara Eaker, an alternate, tests positive for COVID-19 at the team’s training camp east of Tokyo. Kara and another alternate isolate at their hotel, while the rest of the team moves to Tokyo, opting not to stay at the Olympic Village.

JULY 22 – At podium practice, a chance for gymnasts to train on the equipment they will use in the Games, Biles includes two attempts at her trademark Yurchenko double pike vault, landing one almost flawlessly – and shocking her coach, who said she hadn’t known Biles would do that.

JULY 27 – Biles suddenly withdraws from the team competition after one vault, citing mental health concerns. The rest of the team steps up to win silver.

JULY 28 – Biles announces she is withdrawing from the all-around competition on July 29. The event is won by compatriot Sunisa Lee.

JULY 30 – On social media, Biles says she’s suffering from the “twisties,” a sort of disorientation, on all four apparatus, casting further participation in doubt.

JULY 31 – Biles pulls out of finals on vault and uneven bars. A day later, she also pulls out of the floor finals. She is seen cheering her team mates on from the stands.

AUG. 2 – USA Gymnastics confirms Biles will take part in beam finals , her last chance to medal in Tokyo, on Aug. 3.

Review on series 'Katla': A meta exploration of human emotion