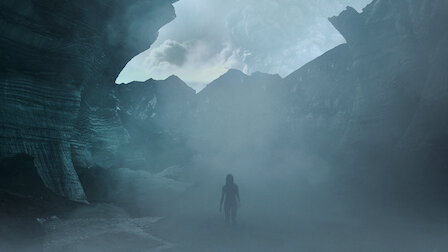 The events in the series take place in the remote town of Vik where the volcano Katla erupts. A year since the eruption, most of the town has vacated, except for a few who chose to stay back through the choking ash from the eruption. Lives of the people in the town begin to turn upside down as eerie unexplained things begin to occur around them. The rest of the drama revolves around how these people try to solve these mysterious happenings and get their lives back on track.

Something about movies or series set in remote Nordic locations has an air of mystery to itself. The naturally pale gray tone of the regions add to the eerie element of the story. In Katla, the location is the central character. A handful of people who have decided to stay back in the town are greatly affected by the natural changes happening around them. While the volcanic eruption and the unexplained occurrences that happen as a result might seem like central to the emotion of the characters, in reality, the series is exploring nuanced human emotions. In just eight episodes, the series gives us a plethora of really deep experiences with each of the characters and how it is tied to the gray ash and smoke rising from the volcano. However, by the end of the series, we could see how these experiences are tied more to themselves than to Katla. It is a meta exploration of grief, with elements outside of human control.

While those who have watched the spectacular ‘Dark’ series might get a similar vibe from this one, Katla, while it has a sci-fi angle to it, the series has more to do with human emotions. It’s a slow burner that is worth a watch. You may go back to it or you may atleast contemplate the idea of going back to yourself, just to know what it feels like.

Inspiring story of a 12-year-old Syrian 'Zaza', The youngest athlete in the Tokyo Olympics 2020