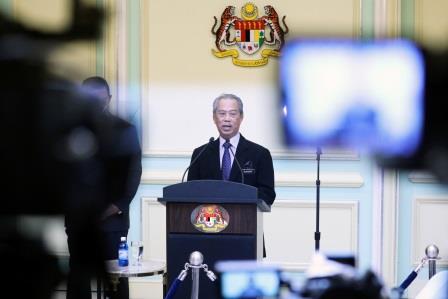 KUALA LUMPUR (Malaysia): Prime Minister Muhyiddin Yassin said in a social media post that he will address the nation at 1230 local time (0430 GMT), after a key ally withdrew support for the government and after calls for him to step down.

Muhyiddin has been under mounting pressure to quit after Malaysia’s king last week issued a rare rebuke of a government move to revoke emergency laws without his approval, an act the palace said ran counter to the constitution.

Some allies have accused Muhyiddin of treason, while opposition lawmakers have urged him to step down for disrespecting the king. Malaysia is a constitutional monarchy and the king is revered across the country’s multi-ethnic population

Muhyiddin has governed with a razor-thin majority and led an unstable ruling coalition since coming to power in March 2020.

The United Malays National Organisation (UMNO) party, the biggest bloc in Muhyiddin’s ruling alliance, on Wednesday again withdrew support for him and said he had lost legitimacy to govern.