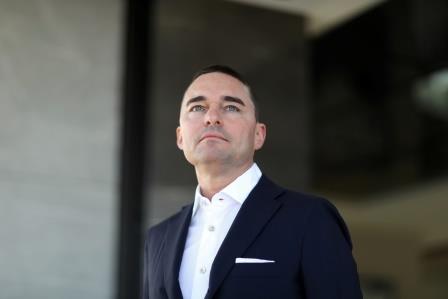 FRANKFURT (GERMANY) – Lars Windhorst, the businessman behind German soccer club Hertha Berlin, said he will repay more than 1 billion euros ($1.2 billion) within months, by selling assets to rid himself of debt and get his finances on a stable footing.

Windhorst told a news agency in a rare interview that his investments, which include Italian lingerie firm La Perla, a 236-metre tall New York apartment block, and a shipbuilder, were worth between 3 and 4 billion euros, outstripping his debts.

As the main investor in one of Germany’s biggest soccer clubs, Windhorst’s financial situation is closely watched, not least because Hertha’s future depends on the support of one of the country’s highest-profile businessmen.

Windhorst, who as a teenager quit school to make computers and became one of Germany’s best-known entrepreneurs when he was chosen by the then chancellor Helmut Kohl to join trade trips, has maintained a jet-set lifestyle despite a dip in his fortunes.

He emerged from two insolvencies, the first during the dot.com internet bust and the second during the financial crisis, and made headlines when he walked away from a fatal plane crash in 2007.

While saying that his earlier funding was “risky”, Windhorst added he was now hurrying to repay up to 1.4 billion euros which is still hanging over him after a restructuring in May.

“I took high risks. Sometimes things went wrong,” Windhorst told Reuters, adding that he had made “a lot of mistakes”, but that he would soon show criticism of him was misplaced.

“You just need to be successful and sustainably successful and prove everyone wrong. That’s why I am getting up every morning. It’s not about money.”

“I’m genuine. I’m honest. We are here to stay,” added Windhorst, who earlier this year sold his stake in Fyber, a technology start-up, for $600 million.

During the week of the interview last month, Windhorst said he flew from Switzerland to Berlin to pick up his wife, before jetting to Los Angeles, New York, Washington, and back to Los Angeles, where he spoke to Reuters via video link.

As well as restructuring his finances, the 44-year-old German now faces a probe by Berlin state prosecutors into his financial dealings although he said this was “not something which is concerning us”.

Regulators had objected to a 270 million euro loan by one company in his group to another, Netherlands-based Tennor, Windhorst said, adding that this had not broken any rules.

“This is nothing strange and exotic. It doesn’t breach any banking regulations. We strongly believe this case will go away,” he said.

Berlin state prosecutors confirmed the criminal inquiry, but declined further comment. If it is pursued, the probe could see Windhorst, who paid a fine for breach of trust in 2009, back in court.

Windhorst’s involvement with Hertha has coincided with a difficult chapter in the history of the club, which is a long way off achieving his vision of becoming a global brand.

Since Windhorst bought a stake in 2019, Hertha, which plays in Germany’s top-tier Bundesliga, has battled to avoid relegation and seen the sudden departure of its coach and former German national trainer Juergen Klinsmann.

“We want to make sure we will get out of the danger zone in the new season,” Windhorst said.

“To my critics: I succeeded, you didn’t. I paid. You were wrong. This will be the strongest turnaround story of any football club in Germany. We will have a major global brand.”

H2O clients were spooked in 2019 by concerns over liquidity and governance of the Windhorst assets, prompting some to withdraw cash.

In May, after months of wrangling, Windhorst announced a restructuring of some 2.5 billion euros of debt, reducing this to about 1.5 billion euros through write-offs and repayments, he said, paying back investors, chiefly H2O.

H2O, which is majority owned by French investment bank Natixis, said the deal would cut exposure to Windhorst.

Natixis, which said last year that it would unwind ownership of H20, declined to comment.

Now Windhorst is seeking to clear the “vast majority” of the remaining debt by the end of this year and the rest in 2022.

“We expect over a billion euros of cash inflows in the next couple of months with asset sales,” said Windhorst.

“We want to be debt free by the middle of next year.”

“In the past, we had long term private debt, which was a risky strategy. We had to be creative and look for more unconventional ways to fund our investments.”