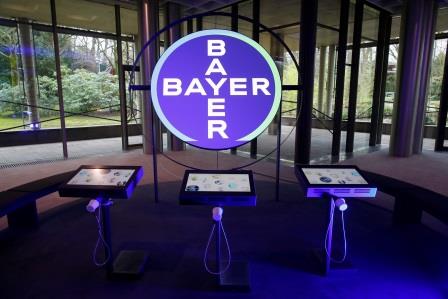 FILE PHOTO: The logo of Bayer AG is seen in a showroom of the German drugmaker where the annual results news conference takes place in Leverkusen, Germany February 27, 2020. REUTERS/Wolfgang Rattay/File Photo

FRANKFURT: Bayer shares fell to their lowest levels in more than seven months after the German agricultural and pharmaceuticals group reported lower-than-expected second-quarter core earnings due to higher production costs and currency headwinds.

Shares in the group fell by as much as 6.1% to the bottom of the DAX, hitting their lowest since Dec. 21, 2020, after second-quarter adjusted EBITDA at Bayer’s Crop Science division declined by more than a quarter.

“Higher prices and volumes, along with contributions from ongoing efficiency programmes only partly offset an increase in costs,” Bayer said in a statement.

Barclays analysts said investors might be concerned by the impact of cost inflation at the Crop Science division, which includes the Roundup weedkiller brand Bayer acquired as part of the $63 billion takeover of Monsanto.

The more optimistic outlook was partly driven by Bayer’s pharmaceuticals division, where second-quarter sales rose 16.2% and which is being strengthened by the acquisition of Vividion Therapeutics for up to $2 billion.

Bayer last week said it would book additional provisions of $4.5 billion related to litigation, which alleges that Roundup can cause cancer, bringing the total to $16.1 billion.

Bayer said it would file in August a petition with the U.S. Supreme Court seeking a review of a lower court ruling that went in favour of Roundup user Edwin Hardeman.