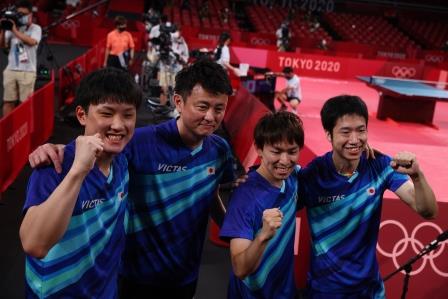 Mizutani and Niwa guided the team event, which involves a doubles match followed by four singles, to a good start with a win against South Korean duo Lee Sangsu and Jeoung Youngsik.

World number four and 18-year-old paddler Harimoto followed with a 3-1 win in the singles match against Jang Woojin, 25.

South Korea fought back with Jeoung crushing Niwa 3-0, but Mizutani sealed Japan’s victory with a win over Jang.

As Mizutani took off his glasses after the win, Harimoto rushed to the table to hug the 32-year-old paddler.

“When Mizutani was leading the opponent 9-2 at the deciding game, Harimoto was already asking me how we should approach him to celebrate the victory,” Niwa said after the match.

Harimoto, born in Japan’s Sendai – which was hit by a major earthquake and tsunami in 2011, said he dreamt of earning a medal ever since Sendai-native Olympic medallist Ai Fukuhara visited his elementary school to show the silver medal she won at the 2012 London Games in the women’s team event.

“To think that it’s my turn to be bringing back the medal to my hometown, it means so much to me,” he said.

South Korea’s Lee said he was “really disappointed about how the event went”. “I was able to prove 90% of myself. What led to the result today is that remaining 10%,” Lee told Reuters.

“While I was able to perform as I practised … today’s loss reflects my ability and this is the reality. So I’d have to research more about the sport,” Lee added.

At the men’s team final to be held later in the day, 2016 Rio team bronze medallists Germany will fight for their first men’s team gold versus reigning champion China.

China will look to follow the footsteps of their women’s team, who won the title the day before, to retain their undefeated record in the event.

China have won all three Olympic table tennis team events since it was introduced in 2008.