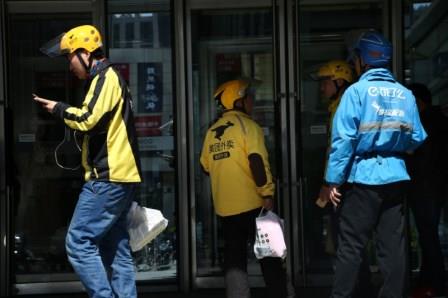 Drivers of food delivery service Ele.me (in blue) and Meituan (in yellow) are seen in Beijing, China April 11, 2018. REUTERS/Stringer

Food delivery platforms, in the spotlight due to China’s regulatory reforms, have attracted severe criticism on social media for their treatment of delivery workers, most of whom are not covered by basic social and medical insurance.

Firms should strengthen safety and labour rights protections, and not set performance indicators which harm the health of workers, according to the meeting.

Alibaba Group, its supermarket operator Hema Xiansheng, Dada Nexus Ltd and other firms also joined the meeting and reported on their efforts to improve safety and labour rights.

Investors believe a major shift is under way in China as the government aggressively pursues reform aimed at cutting cost-of-living pressures at the expense of businesses, roiling stock markets.

A set of reforms announced in July by China’s market regulator pushed food delivery platforms in China to guarantee their workers with income above minimum pay, insurance and a relaxation in delivery deadlines.

Investors are worried about the rising cost of employing riders by the platforms.

Amazon orders all US employees to mask up at work