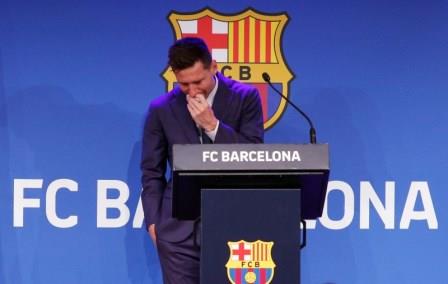 BARCELONA (Spain): Between trying to compose himself, wiping away tears and facing a long standing ovation, it took Lionel Messi more than a minute to start his farewell news conference on Sunday at FC Barcelona, where the Argentine has spent all of his playing career.

“I don’t know if I am going to be able to speak,” were his first words, tears running down his cheeks.

“This is without doubt the most difficult moment of my career,” he said.

Messi, 34 and with Barcelona for 21 years, went on to mop away tears throughout the event, using a tissue handed to him by his wife Antonella Roccuzzo, who was in the front row with their three children.

The event ended in another round of applause.

“I have grown up in the club and I became the man I am here… I feel very sad that I have to leave this club, this club that I love. I wasn’t expecting it,” Messi said, adding that he and his family had been convinced they were going to stay in Barcelona, and “wanted that more than anything”.

He said, however, he wanted to carry on competing and winning titles “as long as I can”, and was talking to Paris St Germain about a potential contract.

The six-time Ballon d’Or winner has had tearful outbursts in the past, after Barcelona’s stunning 3-2 defeat to Chelsea in the semi-final of the Champions League in 2012, which left him prostrated on the pitch and crying, or losing the 2016 Copa America final for Argentina against Chile.

Tears marked his emotional goodbye to his Barca team mate Andres Iniesta who left the club in 2018, and he also cried, this time with joy, when Argentina won the Copa America last month by defeating Brazil 1-0.

Both Barca, which has suffered steep losses recently, and Messi had wanted to sign a new contract.

But the Argentine’s deal would have taken salaries to 110% of the club’s earnings, even after he agreed to a 50% pay cut. The club said this would jeopardise its future given the impact of the COVID-19 pandemic and the need to comply with the financial rules of Spain’s La Liga competition.