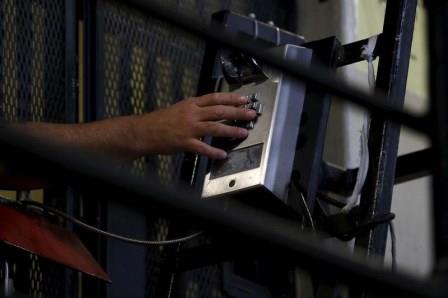 WASHINGTON (US): For people like Heather Bollin, a 43-year-old woman in Texas engaged to a man who is currently incarcerated, constant surveillance is a fact of life: the three daily phone calls they have together are subject to monitoring by prison officials.

“We are never able to communicate without being under surveillance,” she told the Thomson Reuters Foundation in a phone interview, asking that the prison her fiance is in remain anonymous because she fears retaliation.

Prisons in the United States could get more high-tech help keeping tabs on what inmates are saying, after a key House of Representatives panel pressed for a report to study the use of artificial intelligence (AI) to analyze prisoners’ phone calls.

But prisoners’ advocates and inmates’ families say relying on AI to interpret communications opens up the system to mistakes, misunderstandings and racial bias.

The call for the Department of Justice (DOJ) to further explore the technology, to help prevent violent crime and suicide, accompanies an $81 billion-plus spending bill to fund the DOJ and other federal agencies in 2022 that the Appropriations Committee passed last month.

The technology can automatically transcribe inmates’ phone calls analyzing their tone of voice and flagging certain words or phrases, including slang, that officials pre-program into the system.

A House Democratic aide said in an emailed statement they were encouraging the DOJ “to engage with stakeholders in the course of examining the feasibility of utilizing such a system.”

Several state and local facilities across the country have already started using the tech, including in Alabama, Georgia and New York.

The House panel wants the DOJ to look into potentially leveraging the technology for federal use and to identify gaps or shortcomings in the information it produces.

“It’s very unsettling – what if I say something wrong on a call?” said Bollin, who worries about accidentally getting her fiance in trouble. “It could be misconstrued by this technology, and then he could be punished?”

“This Congress should be outlawing racist policing tech – it shouldn’t be funding it,” said Albert Fox Cahn, executive director of the Surveillance Technology Oversight Project (STOP), an advocacy group based in New York.

“People who have been caught up in the criminal justice system are always turned into the subjects of experimentation for new technology systems.”

Proponents dispute such criticisms, saying the tech is a vital time-saving tool for law enforcement and does not target specific groups.

Bill Partridge, chief of police in Oxford, Alabama, said local forces have managed to solve cold case homicides after prisoners were flagged on the phone talking about “actually committing the murder.”

Partridge’s department is one of a handful of agencies in the state that have utilized software from LEO Technologies, a California-based company, that uses Amazon Web Services (AWS) natural language processing and transcription tools to process and flag inmate calls for near real-time analysis.

The police chief said the technology, called Verus, is particularly helpful in preventing suicides. “I think if the federal government starts using it, they’re going to prevent a lot of inmate deaths,” he said.

Scott Kernan, CEO of LEO Technologies and a former Secretary of the California Department of Corrections and Rehabilitation, said the technology is “saving lives both inside and outside of the correctional environments we monitor”.

“Because we listen to all communications, we do not target a race, gender or protected group,” Kernan said.

Specific public data on the number of calls Verus has flagged was not readily available.

Incarcerated people have very few legal protections on the inside to fight back if a machine determines they are about to step out of line, said Bianca Tylek, founder of Worth Rises, a nonprofit working on prison justice issues.

“I think the idea that a machine can hear and understand what a person is saying, and that becomes some kind of tool in court, is ridiculous,” she said.

Technology that transcribes voice conversations is flawed and has a particularly high error rate when applied to the voices of Black people, according to a 2020 paper on the five leading systems by researchers at Stanford University and Georgetown University.

“Speech-to-text technology is not in a place where it can be used to make these kinds of criminal justice decisions,” said Allison Koenecke, the lead author of the study.

The researchers found that Amazon’s automatic speech recognition software had an error rate for Black speakers that was nearly twice as high as for white speakers.

In a statement, an AWS spokesperson said the company’s Amazon Transcribe service is “highly accurate” but acknowledged that heavy accents or poor audio quality can lead to variations in individual words.

They said the service “has never received any reports of abuse or misuse,” that it is inappropriate to chalk up variations to a “single category” like race, and that they are working to identify potential areas to make improvements.

Black men are six times more likely to be behind bars than white men in the United States, according to the Sentencing Project, a research group.

Kentrell Owens, a computer scientist at the University of Washington who studies prison surveillance, said proper oversight of the AI systems is critical.

“Before you implement tech that can control people’s freedom, you need an independent assessment and audit of the tool to determine if the tech even helps you achieve your goals,” he said.

In a 2020 STOP report, Cahn looked at the Securus platform, which uses automated voice recognition technology to log and analyze conversations for the New York State Department of Corrections and Community Supervision (DOCCS).

He said the software violated the privacy rights of prisoners and their families, and had the potential to “automate racial profiling”.

The DOCCS said in a statement that they take the safety and security of staff, visitors and inmates “very seriously” and that they utilize many tools in addition to the Securus software to accomplish their goals.

A spokesperson for Securus did not answer questions about Cahn’s report and potential bias, but said the company did not lobby to get the AI language into the House bill report.

For people like Bollin, the congressional initiative raises the specter of having to forfeit even more of her privacy to continue talking with her fiance.

“We are supposed to be free people, we are not incarcerated,” she said. “But it feels like my rights are constantly being violated.”

A year after contesting in election Lukashenko strikes defiant note