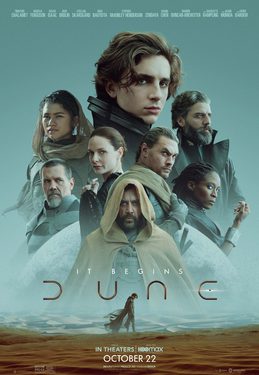 The latest film Dune is the adaptation of the sci-fi novel Dune by Frank Herbert. Dune fans have been begging for the latest version of the movie ever since the first one by David Lynch back in 1984. Fans have been waiting for a better version of the film. Dune is one of those books considered too hard to adapt onto the screen, so Warner Bros decided to entrust it in the hands of Arrival director Denis Villeneuve. Dune was the most awaited release of 2020, however pandemic had other plans. With the release dates pushed, Dune is slated for release this year in HBO Max.

Apart from the magnanimity that is expected out of Dune and Denis Villeneuve’s treatment of the work, the young audience is more thrilled at the supered casting of Zendaya and Timothee Chalamet in the lead roles.
Arakkis and its sand of spice, massive floating ships and everything presented to the viewers through the trailer was designed for the large screen. It is hard to imagine how these floating cities, the still suits and the action sequences might not do justice to the movie when viewed on a small screen. The movie is tailor-made for theatres.

Even in the trailer, every shot looks stunning and inviting. Not read Dune yet? Not watched the first Dune movie? Doesn’t matter, this one would be worth the wait. Would have been much better had it been on the big screen. Dune hits theaters and HBO Max on October 22