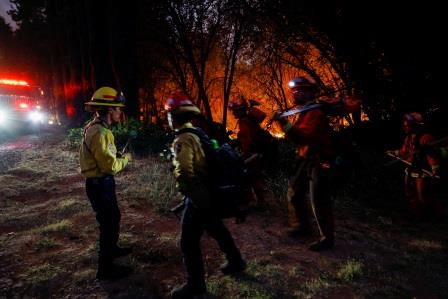 Firefighters move in to clear brush near homes threatened by flames at the River Fire, a wildfire near Grass Valley, California, U.S., August 4, 2021. REUTERS/Fred Greaves

California (US): A rapidly spreading wildfire burned homes and forced thousands to evacuate in two heavily wooded counties northeast of Sacramento in Northern California on Wednesday, generating a towering plume of smoke visible from at least 70 miles (110 km) away.

The River Fire was less than 100 miles (160 km) south of the enduring Dixie Fire, which according to Cal Fire has consumed 278,000 acres and was only 35% contained three weeks after it started.

Social media images showed the Dixie Fire on Wednesday had destroyed multiple structures in one section of Greenville, a town of about 800 people in Plumas County.

The River Fire was not at all contained, but officials said they expected cooler overnight weather and a reversal of the wind direction to help.

At least four homes were destroyed in Colfax, a Placer County town of 2,000 people about 50 miles (80 km) northeast of Sacramento, according to a Reuters witness. Officials said they would have an estimate of the property damage on Thursday.

At least 2,400 people had evacuated their homes in Placer County, and another 4,200 people were under evacuation orders in Nevada County, fire and law enforcement officials told a news conference.

Evacuation centers were established in both counties, and an animal shelter for pets was set up at a fairground.

“Our hearts are with our communities, our friends, our neighbors who have been impacted by this incident,” Bell said.

Carrie Levine, a fire ecologist from nearby Grass Valley, said her family had evacuated even without an official warning because the fire was moving so fast.

“There’s a big column of smoke. It’s pretty dark, kind of like a purple, gray, eerie smoke. It’s in a pretty steep river canyon, and they really like to just blow up river canyons with the wind,” said Levine, who studies fire fuels and develops models for a private company.

Another expert urged people to evacuate because the area was particularly risky.

“In an analysis we did a couple years ago for an insurer, the Colfax/Auburn/Grass Valley area was one of the highest risk areas in the state for a catastrophic loss wildfire,” Crystal Kolden, a pyrogeographer at the University of California Merced, said on Twitter.

More than a dozen wildfires were burning around the state, which typically experiences peak fire season later in the year. California was on pace to suffer even more burnt acreage this year than last year, which was the worst fire season on record.