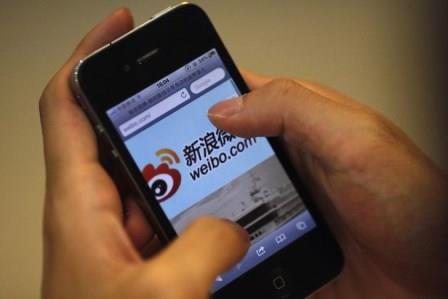 FILE PHOTO: A man holds an iPhone as he visits Sina's Weibo microblogging site in Shanghai May 29, 2012. REUTERS/Carlos Barria

Mao Taotao, director of public relations at Weibo, is suspected of bribery and had “seriously harmed the interests of the company”, according to an internal memo sent to staff and republished in local media.

A company source confirmed the accuracy of the memo.

“In accordance with company policy and the law, we have decided to fire Mao as punishment, and will not re-hire him,” the memo said.

The memo said Mao had been arrested by authorities. Mao joined Weibo in 2010 and quickly rose through the ranks of the marketing and PR department, the memo states. “As a longtime employee of the company and head of an important department. He failed to act as role model and fell to temptation, which fills us with pain and regret,” the memo added. Weibo did not respond to a request for comment from Reuters. Mao could not be immediately reached. Chinese tech companies have doubled down on corruption investigations in recent years, amid an anti-graft campaign by President Xi Jinping and as their valuations and profiles have soared following a tech boom. Earlier this year, a former vice-president of Kuaishou was arrested for alleged corruption, while Tencent Holdings said one of its company executives was being investigated by authorities over allegations of “personal corruption. China’s technology sector also been been embroiled in other controversies this week. Alibaba Group, which part owns Weibo, faced backlash over delaying action relating to an employee’s allegations of sexual assault against her manager and a client. There is no indication that the incidents are linked.