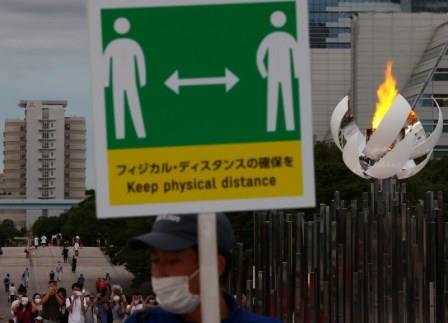 TOKYO (Japan): Japan’s top health adviser said on Thursday he would request stricter emergency measures for about two weeks to tackle a spike in COVID-19 cases in Tokyo and other areas.

Shigeru Omi told reporters the contagion should treated as a natural disaster and he called on the government to increase testing to find and contain the spread.

A few days after the end of the Tokyo Olympics, the capital reported 4,989 new daily cases on Thursday, down slightly from record 5,042 last week. The new number of patients with serious symptoms increased to an all-time daily high of 218.

There has been no evidence that the Olympics directly increased case numbers in Japan, but health experts have warned that holding the Games could have encouraged people to relax infection controls.

Japan is vaccinating more than 1 million people a day, but it still lags many major economies in inoculating its population.

Tokyo is already under a state of emergency, the fourth so far in the pandemic, though some experts have said it should be expanded to cover the whole country. The western prefecture of Osaka reported a record 1,654 new cases on Thursday.

Hospital beds are filling up rapidly, mainly with patients in their 40s and 50s, Omi said. To try to break the chain of infection, he said, authorities should try to reduce human mobility to about 50% of the average in July.

His comments echoed those of a separate panel of experts who said on Thursday contagion in Tokyo had become uncontrollable.

“The number of new positive cases is rapidly increasing, making it impossible to control the situation,” Norio Ohmagari, a health adviser to the Tokyo Metropolitan Government, told a panel chaired by Governor Yuriko Koike.

Koike urged residents to avoid travel and stay home to slow the transmission of COVID-19, which is causing hospitals to have to forego some standard medical care.