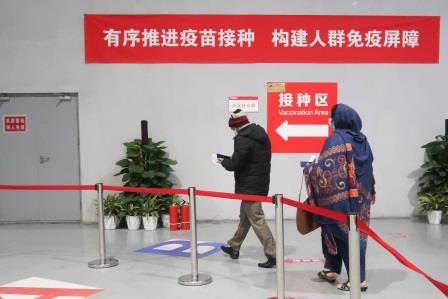 FILE PHOTO: People arrive to get a vaccine against the coronavirus disease (COVID-19) at a vaccination center, during a government-organized visit, in Beijing, China, April 15, 2021. REUTERS/Thomas Peter

The National Health Commission reported 47 new local cases on Aug. 12, the lowest since July 30 in an outbreak that began in the city of Nanjing in eastern Jiangsu province on July 20.

Officials have said the outbreak, mainly fuelled by the highly transmissable Delta variant, most likely started with the exposure of an airport cleaning crew to a passenger jet that arrived from Russia.

It has since spread to several cities, prompting the activation of epidemic containment protocols including mass testing of local populations, demarcating neighbourhoods deemed risky and restricting movement of people in affected cities.

The counter-epidemic measures appeared to have helped confine infections to a handful of provinces including Jiangsu. Nanjing has reported just one to two new cases a day in the past week.

Areas across the country deemed high-risk, where the most stringent restrictions are imposed, stood at an unchanged 27 on Friday, state media reported.

But the number of medium-risk areas has fallen to 127 from a peak of over 210 earlier this week. Medium-risk areas are reclassified as low-risk if they report no new local cases over a 14-day period.

In the southern province of Hunan, some of the tourists who were quarantined after infections broke out in the city of Zhangjiajie last month were released from quarantine on Friday and allowed to return home. The tourists had been placed in quarantine hotels and given five rounds of COVID-19 tests.

But China remains vigilant – wary of the social and economic upheavals caused by the initial outbreak of COVID-19 early last year in the world’s most populous nation.

The National Health Commission said on Friday it required that people wear masks in crowded outdoor venues. The authority said in May last year that masks did not need to be worn outside, although people were required to observe a one-metre social distancing rule.

As of Aug. 12, mainland China had recorded 94,260 confirmed cases, with the cumulative death toll unchanged at 4,636.