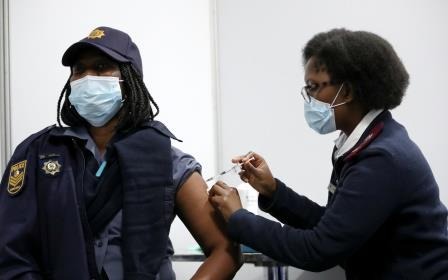 CAPE TOWN (SOUTH AFRICA) – South Africa’s health minister said on Friday he would not recommend a relaxation of COVID-19 lockdown measures despite a downward trend in infections.

He said the country of 60 million had fully vaccinated only around 4 million people as a wave of infections driven by the more infectious Delta variant strains over-burdened hospitals and health workers.

“Our situation therefore remains precarious … We will be recommending remaining at Level 3,” Joe Phaahla told a media briefing before putting his proposals to the cabinet.

In a bid to stimulate the economy, President Cyril Ramaphosa last month eased restrictions to an adjusted “Level 3” in a five-level system, as infections declined.

It means people can travel between provinces for leisure, and retail outlets may sell alcohol from Monday to Thursday.

Phaahla said the national positivity rate, which gives an indication of how widespread infections are, had declined from a high of 35% in mid-July to an average over the last seven days of 19-20%.

However, he noted that the World Health Organisation recommends the rate should be down to 5% before relaxations are considered.

Senior health official Nicholas Crisp said registrations for vaccines had tapered off over the last two weeks, and urged people to sign up as South Africa aims to inoculate 28 million or 70% of adults by the end of December.

“There will be a fourth wave, we have no doubt,” he said.