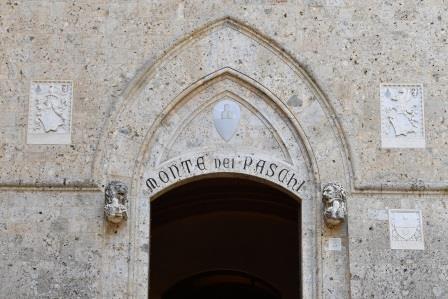 View of the entrance to the headquarters of Monte dei Paschi di Siena (MPS), the oldest bank in the world, which is facing massive layoffs as part of a planned corporate merger, in Siena, Italy, August 11, 2021. Picture taken August 11, 2021. REUTERS/Jennifer Lorenzini

SIENA (Italy): When Italian Prime Minister Mario Draghi returns from his brief summer break one of the thorniest items on his “to do” list will be finally fixing the woes of the world’s oldest bank, Monte dei Paschi di Siena (MPS).

The Tuscan lender’s decline has tarnished Draghi’s record ever since 2008 when, as Bank of Italy chief, he approved its purchase of rival Antonveneta at an inflated price that analysts say contributed to its financial meltdown.

Selling the bank would complete a restructuring of the country’s banking industry which has shed 250 billion euros in impaired loans over the past five years, as lenders brace for a new wave of bankruptcies due to the COVID-19 crisis.

The government thought it had found a solution this summer by brokering a merger with top Italian peer UniCredit, only for a political pushback to get in the way.

Parties of all stripes in Draghi’s national unity coalition are protesting over job losses as a result of the proposed tie-up with Milan-based UniCredit.

“MPS’ territorial roots, its workers and its brand must be safeguarded,” Antonio Misiani, economics chief of the centre-left Democratic Party (PD) told Reuters as battle lines are drawn ahead of what are set to be complex talks.

Politics and MPS have long been intertwined.

Siena, like the rest of the central region of Tuscany, is a traditional bastion of the PD, which has often been criticised for contributing to the bank’s troubles by using it as a source of patronage, jobs and votes.

Rightwing League leader Matteo Salvini, keen to make political capital ahead of a crucial by-election in the city in the autumn, calls MPS “a PD disaster,” and opposes the tie-up.

He wants the state to help MPS join forces with other medium-sized lenders to act as a counterweight, with strong local roots, to the “big players” UniCredit and Intesa Sanpaolo.

The PD has presented no alternative to the UniCredit merger.

It is hard to exaggerate the role MPS has played in the history of Siena, where it was founded in 1472 to help the needy with cheap loans. It has long been the city’s biggest employer and locals who traditionally referred to it as “Daddy Monte” have looked on in horror at its demise.

Processions in Siena’s annual medieval pageant have always made three stops to bow before the city institutions: at the city hall, at the archbishopric and at the MPS headquarters.

As Italy hobbled through three deep recessions since 2008, the bank lost 31 billion euros ($36 billion) on its loan book for a cumulated net loss of 21 billion euros. A state bailout in 2017 cost taxpayers 5.4 billion euros.

UniCredit doesn’t want MPS’ branches in Italy’s poor south, and has only agreed to consider buying “selected parts” of the smaller partner on condition its capital buffers are unaffected and its earnings per share rise by at least 10%.

Moreover the state, which owns 64% of MPS, will keep all legal risks stemming from its mismanagement and any loans already in trouble or which UniCredit deems likely to turn sour.

What UniCredit CEO Andrea Orcel – who as a Merrill Lynch banker in 2007 advised MPS on the Antonveneta deal – describes as the best M&A option on the table, entails state-funded job cuts that sources say may reach a third of MPS’ 21,000 staff.

Andrea Granai, head of a Siena trade union branch, says his four phones ring “from morning to night” with calls from fearful MPS workers. “The more job losses there are the worse the consequences will be for the government and all the parties that back it,” he warned.

So how will Draghi square the circle? So far, he has tried to keep a safe distance by saying he is not personally following the dossier and deflecting reporters’ questions to the Treasury.

That may be increasingly difficult as MPS’ problems rise to the top of his government’s agenda and the front pages of the country’s newspapers.

The UniCredit deal could cost Italian taxpayers more than 5 billion euros in state support for layoffs, tax incentives and a commitment to reinforce the merged bank’s capital, while MPS’ future is fuelling tensions in Draghi’s ruling majority.

Italy’s Treasury sees a merger with a healthier peer as the only way to stop MPS from becoming a permanent drain on state finances and two people close to the negotiation said a final deal was just a matter of hammering out technical details.

The due diligence phase formally runs until early September but at least another two or three weeks could be necessary, a third source said, with a fourth person adding that an accord is unlikely before October.

Politicians, however, are demanding to know from Draghi the precise price tag of the merger.

Raising the political stakes even higher is the fact the PD’s leader, Enrico Letta, who has no seat in parliament, has chosen the upcoming by-election in Siena to try to get one. He says he will quit as party leader if he loses.

The seat, to be contested on Oct. 3-4, was left empty when former Economy Minister Pier Carlo Padoan, also from the PD, was named UniCredit chairman in April.

Salvini’s League and its rightist ally Brothers of Italy sense the chance of delivering a fatal blow to the left.

Their joint candidate against Letta is a local wine producer, Tommaso Marzi, who owns 220 hectares of vineyards in the Sienese countryside and depicts the PD chief as an outsider only interested in national power politics.

In Siena’s sun-baked streets, semi-deserted during the August holidays, locals shrug off the by-election and say all they care about is saving jobs.

“It’s clear the bank can’t stand on its own feet,” the Siena mayor said. “But a solution must protect workers and suppliers. Politics has taken a lot from MPS and Siena, now it’s time for us to get something back.”