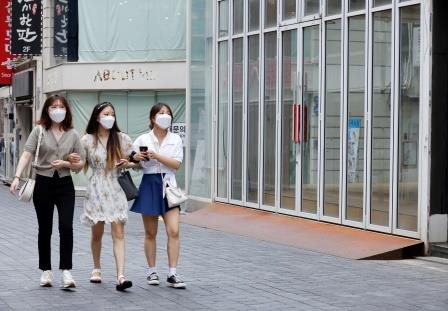 SEOUL (SOUTH KOREA) -South Korea on Friday secures a deal to buy 30 million doses of Pfizer’s COVID-19 vaccine for 2022. The government asked people to cut holiday travel amid a worsening fourth wave of infections and a slow inoculation campaign.

Prime Minister Kim Boo-kyum asked companies to be flexible about allowing people to work from home and urged those returning from holiday to get tested, especially before clocking in for work.

The government’s efforts to curb fresh cases have been stymied by the spread of the highly transmissible Delta variant, which has made contact tracing hard in the peak summer travel season. Supply bottlenecks at vaccine maker Moderna have added to its problems.

South Korea has secured a total of 193 million doses of vaccines, including from Pfizer, Moderna, AstraZeneca, Johnson & Johnson and Novavax. It has fully vaccinated 17.4% of its 52 million population.

Under an existing contract with Pfizer for 66 million doses this year, the country has received 17.88 million.

Korea Disease Control and Prevention Agency (KDCA) Director Jeong Eun-kyeong told a briefing on Friday that the doses under the new Pfizer contract would start to arrive in the first quarter of 2022, and South Korea had the option to buy another 30 million doses.

Moderna told Seoul on Monday it would only be able to deliver less than half the 8.5 million doses it was due to ship this month. The country has a contract for 40 million doses from Moderna, and has received around 2.5 million so far.

The KDCA reported 1,990 new COVID-19 infections for Thursday, after a record daily count of 2,223 on Wednesday

Total cases stand at 220,182, with 2,144 deaths, and the government has said the current wave of infections has not peaked yet.

Kim said the government would secure at least 5% of hospital beds for serious COVID-19 cases in 26 general hospitals in the capital Seoul and surrounding areas.

“There have been many workplace clusters recently,” Kim told a televised speech. “Please make sure the employees returning to work to check for symptoms like fever.”

Under the current distancing rules, employers are advised to increase flexible staffing, with 30% of staff working remotely